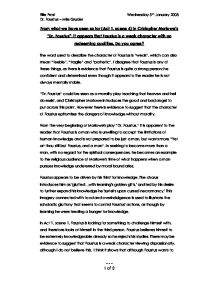 From what we have seen so far (Act 1, scene 6) in Cristopher Marlowe's

From what we have seen so far (Act 1, scene 6) in Cristopher Marlowe's "Dr. Faustus", it appears that Faustus is a weak character with no redeeming qualities. Do you agree? The word used to describe the character of Faustus is "weak", which can also mean "feeble", "fragile" and "pathetic". I disagree that Faustus is any of these things, as there is evidence that Faustus is quite a strong person; he confident and determined even though it appears to the reader he is not always mentally stable. "Dr. Faustus" could be seen as a morality play teaching that heaven and h**l do exsist, and Christopher Marlowe introduces the good and bad angel to put across this point. However there is evidence to suggest that the character of Faustus epitomises the dangers of knowledge without morality. From the very beginning of Marlowe's play "Dr. Faustus," it is apparent to the reader that Faustus is a man who is unwilling to accept the limitations of human knowledge and is not prepared to be just a man, but wants more "Yet art thou still but Faustus, and a man". ...read more.

Although this may not seem a valid reason to reject philosophy, at least he has a reason to do so. He also rejects medicine claiming that he is already a doctor which Marlowe confirms in the chrous by saying "shortly he was graced with doctors name". Faustus therefore feels it pointless to learn more about medicine "The end of physic is our body's health. Why faustus, hast thou not attained that end?" Faustus thirdly rejects Law believing it to be 'boring' and dismisses it as "external trash" by saying "who aims at nothing but external trash" To servile and illiteral for me". The reader sees this as ironic because this is what Faustus is aiming for - he sells his soul for eternal life - is this not "external trash"? Finally we read that Faustus dismisses theology (the study of God). He does so because he beieves God will only punish him for his sins. This refers to the Victorian's viewpoint on a 'punishing God' rather than the modern day 'forgiving God' in which Christians believe. ...read more.

Despite appearing to believe in "God, that made the world," I think that he distances himself from Him and seems to think that he will somehow receive special treatment due to his mental superiority. By responding to Mephastophilis in this sceptial mannor, it shows some weakness in Faustus' character, although I disagree that he could be described as truly "weak", and "with no redeeming qualities" as it is possible Christopher Marlowe could be using the good and bad angels in the as his conscience. In conclusion, analysing what I have read so far (act 1, scene 6) it appears that Faustus' intentions are that of good, showing he is a strong character. Near the end of scene 5, the good angel has the last word, "repent, and they shall never rase thy skin". This shows the reader that Faustus is knowledgeable of morals backing up he is not a feeble character of weakness, but one of strength and knowledge. Ellie Frost Wednesday 5th January 2005 Dr. Faustus - Miss Gruder - - - 1 of 3 ...read more.