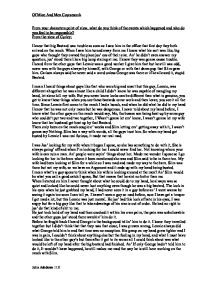 From your characters point of view, what do you think of the events which happened and who do you feel to be responsible?

From your characters point of view, what do you think of the events which happened and who do you feel to be responsible? From the view of Curley: I knew that big Bastard was trouble as soon as I saw him in the office that first day they both arrived on the ranch. When I saw him turned away from me I knew what his sort was like, big guys who thought they owned the place jus' cos of their size. An' he didn't even answer my question, jus' stood there like a big lump staring at me. I knew they was gonna cause trouble. I heard from the other guys that Lennie was a good worker I give him that but he still was odd, never was with the guys always by himself, with George or with that damn pup that Slim gave him. Carlson always said he never said a word unless George was there or if he allowed it, stupid Bastard. I mean I heard things about guys like that who were big and smart but this guy, Lennie, was different altogether he was almost like a child I didn't know he was capable of mangling my hand, let alone kill my wife. But you never know looks can be different than what is genuine, you get to know these things when you see these bastards come work and then leave, you see it all the time. ...read more.

I haven't seen a guy so mad before, sure I have got a temper I get mad a lot, but this Lennie was just mental. He jus' had this look of hate in his eyes, I was angry but for a big guy like that to take advantage of his size is out of order. He had no right to jus' do that kind of shit to me. He just took hold of my hand and then crushed it within his own palm, the pain was unbelievable and the other guys jus' stood there watchin' him do it. Before he fought back I heard George in the background tellin' him to do it. I knew they travelled together but I didn't think that that they was that close, I was proven wrong, Lennie always did what George told him to and that time was no exception. His grasp on my hand grew tighter and I was in pain, I couldn't think about anything else but the feeling in my hand, and what I must have looked like to the other guy's but then after it got to its worse all I could think about was what would be left of my hand after the big bastard had finished. An' If only George hadn't told him to do it, It wouldn't have happened, he still makes me mad the way he is still here working on the ranch with Slim. ...read more.

Carlson knew it was him too, an' I could see it in George's eyes that he also knew what was going on. I wasn't gonna let Lennie get away with it either. My wife was a slow bitch but it was Lennie who took her life and he wasn't gonna get out of this one by the other guys keeping 'em Quiet. I had done that already once, when I could have got him canned, but I didn't for my pride now he had the life of my wife. But George was his friend, regardless of this he still went looking for him. I was suspicious though, I mean they travelled together and how did I know that he wasn't gonna help Lennie get away and escape. But I Spose the dumb bastard wouldn't make it on his own without some other guy helping him out or getting' him outa shit. When me and the guys saw Lennie lying on the floor next to George I was livid, I hadn't killed the crazy Bastard myself, I was gonna make him suffer the way I had. I don't know everything that went on but what I do know is that Lennie was to blame for the death of my wife and my hand was never gonna be the same cos of him being a crazy Bastard. I could see that they were gonna mess things up, an' I was right. ?? ?? ?? ?? Of Mice And Men Coursework Julia Ashdown 11E ...read more.