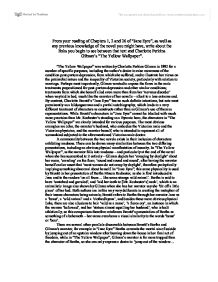 From your reading of Chapters 1, 2 and 26 of Jane Eyre, as well as any previous knowledge of the novel you might have, write about the links you begin to see between that text and Charlotte Perkins Gilmans The Yellow Wallpaper

From your reading of Chapters 1, 2 and 26 of "Jane Eyre", as well as any previous knowledge of the novel you might have, write about the links you begin to see between that text and Charlotte Perkins Gilman's "The Yellow Wallpaper". "The Yellow Wallpaper" was written by Charlotte Perkins Gilman in 1892 for a number of specific purposes, including the author's desire to raise awareness of the condition post-partum depression, from which she suffered, and to illustrate her views on the patriarchal nature and the inequality of Victorian society, particularly with relation to marriage. Perhaps most importantly, Gilman wanted to expose the flaws in the male treatments propositioned for post-partum depression and other similar conditions; treatments from which she herself ailed even more than from her 'nervous disorder' when waylaid in bed, much like the narrator of her novella - albeit to a less extreme end. By contrast, Charlotte Bront�'s "Jane Eyre" has no such definite intentions, but acts most prominently as a bildungsroman and a partial autobiography, which leads to a very different treatment of characters as constructs rather than as Gilman's use of them as representations. While Bront�'s characters in "Jane Eyre" cannot be labelled with much more precision than Mr. ...read more.

Bertha is referred to by Bront� through Jane Eyre as an 'it', solidifying this idea of her insanity rendering her inhuman. However, the marked difference between the protagonist of "The Yellow Wallpaper" and one of the antagonists of "Jane Eyre" is indeed the fact that Bertha has the freedom to carry out her insane thoughts, while Gilman has created in her novella such an image of imprisonment that her own character fails to complete either undertaking. This idea is crucial to Gilman's message of women's entrapment in a Victorian patriarchal society, and therefore contributes to the novella's effectiveness. On the other hand, since "Jane Eyre" was not written with such a definite intention as "The Yellow Wallpaper", the actions of Bertha are designed to contribute to the plot of the novel more than to convey a message about the treatment of women, the mentally insane or the handicapped, though the latter readings could also be taken. A more obvious difference between the two novels is that it is the autodiegetic narrator we can assume to be called Jane of "The Yellow Wallpaper" that exhibits insanity, thereby directly demonstrating to the reader the lack of cohesion in her mind, while in "Jane Eyre" Bertha's insanity is regarded by the readers through the eyes of Bront�'s eponymous narrator. ...read more.

Reed] breathed his last', creating a direct link between the image of the enormous bed, and death. The wallpaper 'is stripped off... in great patches all around the head of [the] bed' in "The Yellow Wallpaper", which is an image inviting the reader to infer circumstances under which this could of occurred - most of which would certainly involve some kind of pain, suffering or desperation. There are a great many similarities between the novels "Jane Eyre" and "The Yellow Wallpaper" despite their differences in genesis and purpose, and simultaneously many differences caused by the same. There is a wealth of imagery common to the two which highlight interesting ideas, such as the link between zoomorphism and the literary presentation of insanity, as well as the inherently patriarchal nature of Victorian society which is key and consuming in "The Yellow Wallpaper" but is in fact overcome in "Jane Eyre" when the heroine marries a blind and partially crippled Mr. Rochester, therefore in many ways giving her more power over him than he has over her. The differences in the texts are equally as worthy of note and interest as the similarities, as when the two texts are compared the exact nuances of each become more explicitly clear and both texts are enriched. ?? ?? ?? ?? ...read more.