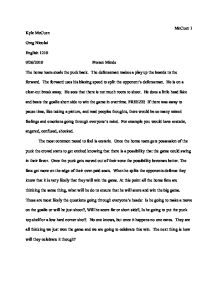 Frozen Minds. The home team steals the puck back. The defenseman makes a play up the boards to the forward. The forward uses his blazing speed to split the opponents defenseman.

Kyle McCuen Greg Nicolai English 1210 9/26/2010 Frozen Minds The home team steals the puck back. The defenseman makes a play up the boards to the forward. The forward uses his blazing speed to split the opponent's defenseman. He is on a clear-cut break away. He sees that there is not much room to shoot. He does a little head fake and beats the goalie short side to win the game in overtime. FREEZE! If there was away to pause time, like taking a picture, and read peoples thoughts, there would be so many mixed feelings and emotions going through everyone's mind. For example you would have ecstatic, angered, confused, shocked. The most common mood to feel is ecstatic. Once the home team gets possession of the puck the crowd starts to get excited knowing that there is a possibility that the game could swing in their favor. Once the puck gets moved out of their zone the possibility becomes better. The fans get more on the edge of their over-paid seats. ...read more.

Now as the other team is breaking out of their zone the thoughts get a little bit more nervous. Once the opposing team's forward breaks past your defenseman the sense of urgency shoots through the roof. Now it's all up to the goalie to save the shot. In situations like this it's usually about a 50/50 chance that the goalie will save it. The person who will win this battle is the one that is calmer and knows more of what they have to do. In this case the player knew what he had to do to beat the goalie so he did it. After the fact, the goalie is angry with himself for falling for the head fake. The player who ever gave the puck up in the offensive zone is frustrated; because there was something he could have done to prevent the turnover. It always seems like no matter what happens there was something you could have done differently to change the play or to stop something bad from happening. ...read more.

That is why they question why did they make that pass or why didn't they shoot the puck instead of making that last move on the goalie. They just seem completely oblivious to the fact that everything is boom, boom, boom; it just happens so fast that there is no time to think. All in all, there are different kinds of people in the world and everyone thinks differently. There isn't always a right or wrong answer. There is always a different view or feeling on how the situation is. In a sporting event you may think everyone is as excited or as bummed as you are, but it just isn't that way. The reason why sporting events are so much fun is because everyone wants their way to happen and there is no wrong way to feel. You as a fan can change the way the game is played by cheering because your excited, or booing because you mad or depressed. That is why every person needs to go to a sporting event of there liking. McCuen 1 ...read more.