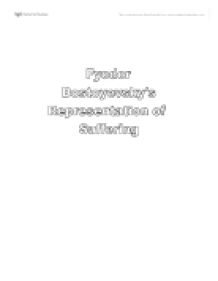 "If you live, you suffer. Some people suffer more, but not because they want to..." (Malamud, 150). This quote represents the theme of "Crime and Punishment" by Fyodor Dostoyevsky. All the characters in this novel have some form or another of suffering and they continue to enforce this pain upon themselves. Suffering is to tolerate or endure evil, injury, pain, or death. (http://dictionary.reference.com/search?q=suffering) Rodion Romanovitch Raskolnikov is the main character in "Crime and Punishment". He was an intellectual student, who was supposed to become an educated professional but poverty had overtook his chances of continuing his career. Since the beginning, he has inflicted pain upon himself by isolating himself from society. When he went to college, "He took no part in the student get-togethers, conversations, amusements, or in anything. He worked hard, without sparing himself, and for this he was respected; but no one liked him. He was poor, and somehow stiff, proud, and uncommunicative, as though they were children, as though he were ahead of them not only in development and knowledge but in the quality of his convictions, and that he regarded their convictions and interests as inferior" (Dostoyevsky, 59). ...read more.

Sonya is also very religious, that is how she keeps herself sane. She trusts that God does things for a purpose and that is very noble of her to still believe in God even after she sacrificed herself for the sake of her family. Marmeladov knows that he let his family down in many ways but continues with his habits of destruction. He knows that when he drinks all their money away that Katerina will mistreat him. He said, "and it's not because she starts pulling my hair that I'm afraid. What do I care about hair! Hair doesn't mean a thing! If she starts pulling, it is even better. That is not what I am afraid of... I am... afraid of her eyes... yes... her eyes... I am also afraid of those red stains on her cheeks... And I am afraid of the way she breathes... You know how they breathe when they have this disease... But I am not afraid of her blows.... You must realize, sir, that such blows not only fail to inflict pain, they are actually a pleasure." (Dostoyevsky, 34). Marmeladov tells us that he enjoys the pain he gets from Katerina because he feels that he deserves it. ...read more.

Every time the officer has a conversation with Raskolnikov, he gets so fearful and anxious that he has to leave in order to get his cool back. This shows that he is on the verge of confessing because guilt is overtaking his mind and soul. Raskolnikov only feels some normality when he is with Sonya. Sonya is vulnerable and he likes her kindness even though she also has a hard life. All the Characters in "Crime and Punishment" cause suffering upon themselves. It is not done in an intentional way but after they suffer they begin to feel redemption. Marmeladov liked to suffer and only felt human when he got punished. Sonya, Dunya and Pulcheria suffered for the sake of their families because they believed that it was for a better cause. Luzhin suffered because he was too egocentric to realize that he was hurting himself. Raskolnikov believed that he was murdering the pawnbroker for the sake of human kind but instead it ruined his life because he was consumed with guilt. The regret mainly came from killing the innocent sister, which made him isolate himself even more. The state of suffering that they all experienced was an escape. They knew what they were doing and felt bad or wrong about it. Suffering was their way of paying for their sins. ...read more.