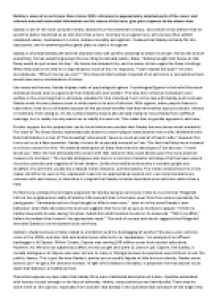 Gatsby is more of an anti-hero than a hero. With reference to appropriately selected parts of the novel, and relevant external contextual information on the nature of the hero, give your response to the above view.

Transfer-Encoding: chunked ﻿Gatsby is more of an anti-hero than a hero. With reference to appropriately selected parts of the novel, and relevant external contextual information on the nature of the hero, give your response to the above view. Gatsby is one of the most complex literary characters of the twentieth century, and certain critics believe that he would be better described as an anti-hero than a hero. Contrary to a regular hero, anti-heroes often exhibit misplaced values, involvement in crime, dubious morality and egotism. I believe that Gatsby certainly fits this description, and in examining why a good place to start is his egoism. Gatsby is a fundamentally self-centred character who will sacrifice anything to attain his dream. He has the best of everything. He has everything except the one thing he actually wants, Daisy: "Gatsby bought that house so that Daisy would be just across the bay." His desire has deluded him, and he seems to lack regard for Daisy?s feelings. When Nick warns him that he is expecting too much of her, he responds, ?"Can't repeat the past?" he cried incredulously. "Why of course you can!"? This close-minded outlook is typical of an anti-hero; a conventional hero would have more consideration of others. ...read more.

This was a very common crime in the 1920s, and bars that sold alcohol were referred to as ‘speakeasies.’ An example of an affluent bootlegger is Al Capone. Within 2 years, Capone was earning $60 million a year from alcohol sales alone. However, his life was not a glamorous affair; he was caught and spent 11 years in jail. Capone, like Gatsby, is morally ambiguous. Al Capone was seen as hero to many in Chicago because he operated soup kitchens to win the public’s favour. This is just like how Gatsby’s parties act as a public façade to hide his true identity. Gatsby never went to jail – he got a life sentence instead. In light of this blatant criminality, it perplexes me that anyone could claim that Gatsby is a traditional hero. Those that oppose my view claim that Gatsby fits a more traditional description of a hero. Qualities associated with heroes include strength in the face of adversity, vitality, resourcefulness and individuality. There may be some merit to this opinion, especially if we consider that Gatsby is the quintessential caricature of the tragic hero. In tragedy, the hero’s downfall is due to combination of external circumstances and internal flaws. ...read more.

Gatsby is certainly a good deal more moral than many of the characters that surround him. Again, to quote Nick: ??They're a rotten crowd,? I shouted across the lawn. ?You're worth the whole d**n bunch put together.?? The "rotten crowd" to whom Nick is referring are the rich characters such as the Buchanans, Tom and Daisy, who run away from their problems and hide behind their money. Nick points out that even a liar and criminal like Gatsby is better than the other liars and criminals because of his boyish romantic dreams. His desires are focused on ideals (like love) instead of materialism, and he did the honourable thing in waiting and sacrificing himself for Daisy, his holy grail. This sliver of morality is enough to claim that Gatsby is mores a traditional hero than an anti-hero. To conclude, after careful consideration we determine that Gatsby is indeed more of an anti-hero than a hero due to his general lack of redeeming features. It could be argued that there are no heroes in The Great Gatsby, and that is one of the aspects that make it stand out in the literary world. The opposing arguments have some merit but ultimately they fail to realise the true implications and context of The Great Gatsby. ...read more.