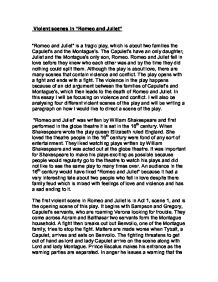 Violent scenes in "Romeo and Juliet" "Romeo and Juliet" is a tragic play, which is about two families the Capulet's and the Montague's. The Capulet's have an only daughter, Juliet and the Montague's only son, Romeo. Romeo and Juliet fell in love before they knew who each other was and by the time they did nothing could split them. Although the play is about love, there are many scenes that contain violence and conflict. The play opens with a fight and ends with a fight. The violence in the play happens because of an old argument between the families of Capulet's and Montague's, which then leads to the death of Romeo and Juliet. In this essay I will be focusing on violence and conflict. I will also be analysing four different violent scenes of the play and will be writing a paragraph on how I would like to direct a scene of the play. "Romeo and Juliet" was written by William Shakespeare and first performed in the globe theatre it is set in the 16th century. When Shakespeare wrote the play queen Elizabeth ruled England. She loved the theatre people in the 16th century were fond of any sort of entertainment. They liked watching plays written by William Shakespeare and was acted out at the globe theatre. ...read more.

This leads to Romeo being thrown out of Verona he should have been executed but he was given a bit of mercy as he was just retaliating to Tybalt who started the fight in act 3, scene 1. The second violent scene in this play is Act 3, scene 1. The scene begins with Mercutio, Benvolio and.. , aware that trouble will happen in the hot weather. Tybalt appears looking for Romeo to challenge him to fight. Romeo comes straight from his wedding to Juliet and Tybalt wants a fight but Romeo doesn't want to fight his cousin in law even though no one, even Tybalt doesn't know this. Mercutio begins fighting with Tybalt so Romeo tries to break the fight up but Mercutio gets accidentally wounded and he tries to joke it off as a small cut but then Romeo realises it is a life threatening injury. When Mercutio, Romeo goes looking for Tybalt to get revenge for Mercutios death. When he does find him he is so angry that he kills him. He then realises his mistake and runs from where the murder took place. The Prince then comes with the Lord and Lady Capulet and Montague. The Prince hears the version of events from Benvolio and then decides to many lives have been lost and bans Romeo form coming back into Verona ever again. ...read more.

They both realise Romeo has committed suicide. Friar wet to leave and wanted Juliet to come but she wouldn't, when he leaves she picks up Romeo's dagger and kills herself. At the end of the scene both the Montague family and the Capulet family join hands and stop there argument. This is a violent scene due to the fight at the begging of the scene were Paris gets killed. Then Romeo poisons himself and dies then Juliet commits suicide to by stabbing herself. This scene is important because in this scene both Romeo and Juliet die and there families sort out there argument that they had together. If I had to direct Act 5, scene 3 for the stage, I would keep the killing of Paris but make sure that it is died down a lot and it doesn't compare to the killings of Romeo and Juliet. the stage would be a dark dusty tomb with dead bodies all around. This would give it a scary and gloomy atmosphere. I would also show how upset Juliet was by having her scream at the top of her voice when she sees that Romeo is dead. This would make the audience think she was going mad by the grief. I think that this play is very complicated as it has two different emotions involved, love and hate which are complete opposite emotions. But all the violent scenes do prove it is a violent even though it has a lot about love in the play. ...read more.