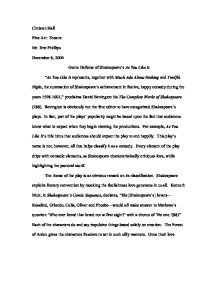 Christen Hall Fine Art: Theatre Mr. Eric Phillips December 8, 2004 Genre Defense of Shakespeare's As You Like It "As You Like It represents, together with Much Ado About Nothing and Twelfth Night, the summation of Shakespeare's achievement in festive, happy comedy during the years 1598-1601," proclaims David Bevington his The Complete Works of Shakespeare (288). Bevington is obviously not the first editor to have categorized Shakespeare's plays. In fact, part of the plays' popularity might be based upon the fact that audiences know what to expect when they begin viewing the productions. For example, As You Like It's title hints that audiences should expect the play to end happily. This play's name is not, however, all that helps classify it as a comedy. Every element of the play drips with comedic elements, as Shakespeare characteristically critiques love, while highlighting the pastoral motif. The theme of the play is an obvious remark on its classification. Shakespeare exploits literary convention by mocking the foolishness love generates in us all. Kenneth Muir, in Shakespeare's Comic Sequence, declares, "His [Shakespeare's] lovers-Rosalind, Orlando, Celia, Oliver and Phoebe-would all make answer to Marlowe's question 'Who ever loved that loved not at first sight?' with a chorus of 'No one.'(88)" Each of the characters do and say impulsive things based solely on emotion. The Forest of Arden gives the characters freedom to act in such silly manners. ...read more.

Commentator Kenneth Muir remarks, "In As You Like It different kinds of love are examined-the l**t of Touchstone, the self-love of Jacques, the pride and vanity of Phoebe, and the sentimental idealism of Orlando-and all are found wanting" (91). The central relationship is between Rosalind and Orlando, whom Bertrand Evans describes as "the brightest of Shakespeare's bright heroines" and "the least conscious of his unconscious heroes" (92). Orlando seems a typical jock. He wrestles Charles in the court and then falls hopelessly in love with Rosalind-so hopelessly in love that he, despite being a poor poet, carves Rosalind's name and poems about her into tree trunks. Although Oliver has denied him a gentleman's education, he is a noble character, who is loyal to his servant Adam, brave enough to fight Charles, and loving when speaking about his beloved Rosalind. Nonetheless, Orlando must have some naivet� in order for Rosalind to continue fooling him. Evans expounds, "Despite the deserved praise which Oliver heaps upon Orlando [...,] Orlando is exposed repeatedly in situations of which the truth eludes him. [...] His abrupt disposal of Charles the wrestler; his first tongue-tied meeting with Rosalind; his sword-brandishing, valiant, but frightfully unaware entrance to demand food of Duke Senior-all these are parts of the preparation." (92-3) Orlando's good intentions are mocked somewhat by his actions. ...read more.

Rosalind and Celia also interchange in prose. Prose dominates the dialogue between the lovers. Rhymed verse is generally used when Orlando attempts to write poems about his beloved Rosalind. Blank verse, a higher form, is used most often by Jacques, but Duke Senior also utilizes to proclaim the good that nature has offered him. In this critique of love, blank verse is reserved most often for use by those characters unaffected by love. The language lends itself to the play's love-at-first-sight theme in that the lovers do not have time to organize their thoughts in a collected way, but rather speak whatever first enters their mind. The play appeals to the comedic audience visually and aurally as well. Most notably, Rosalind's disguise allows the audience, aware of the fact that the boy they see pretending to be a woman is actually the woman he is pretending to be, to laugh at the incongruities of Orlando's pretend love for and Phoebe's real love for Ganymede. The disguise also presents funny sounds as Rosalind's voice must change depending on the character she is playing. The other pastoral characters also lend country-bumpkin accents to the plays aural elements, as they are less sophisticated than the courtly characters. As You Like It could not be more comedic. Each of the plays elements presents stereotypical characteristics of comedy. Shakespeare obviously knew the requirements of each genre and managed to control those requirements while never ceasing to dazzle his audience. His works were all as we like them. ...read more.