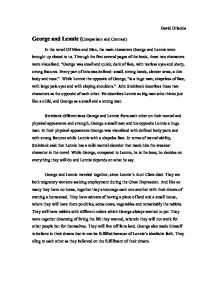 George and Lennie- COmparison and Contrast

David Urlanda George and Lennie (Comparison and Contrast) In the novel Of Mice and Men, the main characters George and Lennie were brought up closed to us. Through the first several pages of the book, these two characters were visualized. "George was small and quick, dark of face, with restless eyes and sharp, strong features. Every part of him was defined: small, strong hands, slender arms, a thin body and nose." While Lennie the opposite of George, "is a huge man, shapeless of face, with large pale eyes and with sloping shoulders." John Steinbeck describes these two characters as the opposite of each other. He describes Lennie as big man who thinks just like a child, and George as a small and a strong man. ...read more.

And like so many they have no home, together they encourage each one another with their dream of owning a homestead. They have adream of having a piece of land and a small house, where they will have there poultries, some cows, vegetables and remarkably the rabbits. They will have rabbits with different colors which George always wanted to pet. They were together dreaming of living the life they wanted, wherein they will not work for other people but for themselves. They will live off fatta land. George also made himself to believe in their dream that in can be fulfilled because of Lennie's idealistic faith. ...read more.

Not just Lennie but also George. George showed his loyalty to Lennie on the part where he is p****d and then telling Lennie that he got him rather than having his own life alone. And without Lennie, George would be alone and unhappy, he realizes: "course Lennie's a nuisance most of the time, but you get used to going around with a guy and you can't get rid of him." Lennie and George love one another; they know what their lives have meaning because they are friends. They differ among any others because they have each other in life. They had a dream and hope that it will come true. When Lennie accidentally breaks the neck of Curley's wife, George kills Lennie in act of mercy and love, and saving him from dying by the hands of a stranger. ...read more.

This has the potential to be a good essay as the writer clearly understands and knows the main themes of the novel. Some good quotes are used but PEA is needed throughout the essay. Topic sentences should be used at the beginning of every paragraph which introduce the topic to be discussed and refer to the question. It is not enough to merely retell the story.