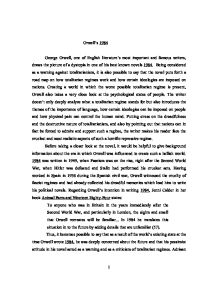 George Orwell, one of English literatures most important and famous writers, draws the picture of a dystopia in one of his best known novels 1984. Being considered as a warning against totalitarianism, it is also possible to say that the novel puts fo

Orwell's 1984 George Orwell, one of English literature's most important and famous writers, draws the picture of a dystopia in one of his best known novels 1984. Being considered as a warning against totalitarianism, it is also possible to say that the novel puts forth a road map on how totalitarian regimes work and how certain ideologies are imposed on nations. Creating a world in which the worst possible totalitarian regime is present, Orwell also takes a very close look at the psychological states of people. The writer doesn't only deeply analyze what a totalitarian regime stands for but also introduces the themes of the importance of language, how certain ideologies can be imposed on people and how physical pain can control the human mind. Putting stress on the dreadfulness and the destructive nature of totalitarianism, and also by pointing out that nations can in fact be forced to admire and support such a regime, the writer makes his reader face the cruelest and most realistic aspects of such a horrific repressive regime. Before taking a closer look at the novel, it would be helpful to give background information about the era in which Orwell was influenced to create such a hellish world. 1984 was written in 1949, when Fascism was on the rise, right after the Second World War, when Hitler was defeated and Stalin had performed his cruelest acts. Having worked in Spain in 1936 during the Spanish civil war, Orwell witnessed the cruelty of fascist regimes and had already collected his dreadful memories which lead him to write his political novels. Regarding Orwell's intention in writing 1984, Jenni Calder in her book Animal Farm and Nineteen Eighty-Four states: To anyone who was in Britain in the years immediately after the Second World War, and particularly in London, the sights and smell that Orwell recreates will be familiar... In 1984 he translates this situation in to the future by adding details that are unfamiliar (57). ...read more.

Thus it would be possible to say that Big Brother, in the novel, functions as the Panopticon for the citizens of Ocenia, since people never know when they are being watched and due to their fear towards the existing totalitarian power, they act in proper manner when the sanctions of the regime are concerned. As the last motto "Ignorance is Strength" is concerned, the party makes its final stroke on the big picture by saying that none of these things should be thought through, since ignorance and accepting things just the way they are is a kind of strength. By doing so and by applying these mottos, the party blocks all the ways for its citizens to rebel against the system. The concept of "Thoughtcrime", gets under the spotlight at this stage, since despite all the cautions taken against any threat or rebellions against the system, the party guarantees its permanence by also limiting the thoughts of its citizens. Having mentioned that the act of thinking itself is an undesirable act for the regime, the party strictly watches people in all their actions. The screens which are placed all over the city and even in the homes of citizens, completely removes the privacy of Oceania's people. Big Brother's picture staring at its citizens and controlling them in every action they take strengthens the idea of the totalitarian regime in the novel. Looking at Big Brother's picture symbolically, it may become possible to say that Orwell draws parallelism between the picture of Stalin and Big Brother. Drawing the picture of a totalitarian regime, Orwell points out the main principles of how such a regime would succeed. As Robert J. Savage, James Combs and Dan Nimmo quote Jane Kirkpatric's words in their book The Orwellian Moment: In a recent and well known essay, Jane Kirkpatric describes totalitarian societies as ones which drive to establish comprehensive political control over the lives of individuals, obliterating in both theory and practice the distinction between public and private, between objective and subjective, claiming for the state the whole life of people (47). ...read more.

The ceremony which is presented here is similar to the Catholic rituals that take place in church. Believers are offered some wine which symbolizes the blood of Christ and they are placed a piece of bread on their tongs to symbolize the body of Christ. Going through a similar ceremony with Goldstein, Orwell in fact makes a foreshadowing that even the opposition, which stands for Goldstein at the beginning of the novel, is in fact one of the closest persons to the party. Thus, there is no way out of the system. If this theme is compared to the theme of religion, the devil, who is the opposing party to God, is in fact an angel and that it is again strongly related to God. Drawing parallel lines between the party and religion, Orwell states that the Party is God like figure for the people of Oceania and that there's no escape from it. In conclusion, speaking in general terms, the novel functions as a warning against the totalitarian regime and reveals the fact that such repressive regimes, do in fact have the power to manipulate people and that they do have the power in making people believe things which appeared as totally bizarre at the beginning. Taking physical pain ruling over the human mind as a theme, Orwell states that human beings are selfish in nature, since they posses the basic instinct of survival. Putting also major emphasis on the concept of language and how it functions in people's lives, Orwell states that it is in fact the language itself that shapes the motives of people and that makes some concepts become reality. The lack of expression of some concepts in language would automatically destroy them and make them become nonexistent for human beings. Despite the novel as a whole appears as a pessimist approach to the future, taking it as a warning and looking at our present state in today's modern world, readers can still feel gratitude for the present capitalist system they live in now and they still can preserve their hope for a better future. ...read more.