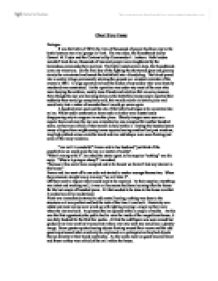 Ghost Story Essay Prologue It was the battle of 1801; the lives of thousands of people had been lost in the battle between two rival groups in York. The two sides, the Roundheads led by General M. Taylor and the Caxtons led by Commander L. Jackson. Both leaders wouldn't back down; thousands of innocent people were slaughtered by the horrendous commands they received. The battle lasted several days, the Roundheads came out victorious. On the final day of the fighting the sky turned grey and gloomy, slowly the rain started and turned the battlefield into a b****y bog. The blood spread into a nearby village permanently staining the ground as a constant reminder of the events in 1801. A large operation to bury the bodies of any soldier who were brutally murdered was constructed. As the operation was under way most of the men who were burying the soldiers, mostly close friends and relatives felt an eerie presence. Even though the sun was beaming down on the battlefield many people reported that suddenly they would go completely cold, this would only be in certain place and would only last a matter of seconds then it would go warm again. A hundred years past and the site of the battle had begun to be converted into an inn. Whilst under construction items such as timber were mysteriously disappearing only to reappear in another place. ...read more.

"What, What was that" Emma shrieked "I, I don't know its probably just a window shutting" "Jon there's no one up there" "It's probably the wind shutting it" Jon said, desperately trying to think up reasonable explanations for the noise. Jon suddenly remembered that as there was no guests in the inn then it couldn't have been a window shutting, as they would already be closed. "You don't think that it's a spirit do you" Emma asked. Emma is a strong believer in the spiritual world. "Of course not" just as Jon said that the noise sounded again this time it was a lot louder. Jon ran up the stairs to see where the noise was coming from, but when he got there the noise had stopped. On his way back down he saw a large, dark figure of what looked like a man and without thinking he said "hi". It was only when he told his wife about the peculiar dressed man that he remembered that no one was in the inn, it was completely empty so what had he seen, was it a ghost or was it his mind playing tricks on him, he didn't know. Over the next few days the noises grew worse and the sightings of dark figures were seen more and more often. ...read more.

Whilst waiting for the vicar the hooded figure had been creating loud noises up stairs as if it was angry, none of the people in the house was brave enough to go to face the ghost. Around an hour later the vicar turned up and was taken directly to the place of the spirit and started the exorcism. This only aggravated the spirit even more and it started to go mad, it kept screaming until when the exorcism was complete and the whole house went silent. After the inn was searched for any more traces of ghosts using devices that Derek had brought with him. Nothing showed up and the inn was in an eerie silence. Derek left as his job was done. The next morning Jon and Emma decided to readvertise the inn and shortly the inn returned to its full capacity. Jon still wondered what had caused the spirits to wander the spot of the inn and it wasn't till he went to the local library and looked at the history of the town that he found out. When he found that the inn was built on an ancient battle site and burial ground. Once he found this out he phoned the local newspaper and gave them the story, which made front-page news. No ghosts were reported again but some still say that lost spirits still wander the grounds of the house at nights. ...read more.