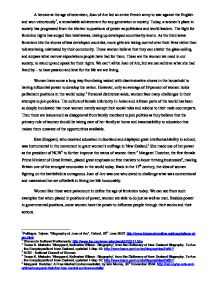 Girl power - women who have inspired me. As the third wave feminism hits the shores of less developed countries, more girls are taking control over their lives rather than tolerate being mistreated by their community. These women believe that they can sh

A heroine at the age of seventeen, Joan of Arc led an entire French army to war against the English and won victoriously1, a remarkable achievement for any generation or society. Today, a women's place in society has progressed from the kitchen to positions of power as politicians and world leaders. The fight for feminine rights has surged like tidal waves, taking up developed countries by storm. As the third wave feminism hits the shores of less developed countries, more girls are taking control over their lives rather than tolerate being mistreated by their community. These women believe that they can shatter the glass ceiling and surpass what narrow expectations people have had for them. These are the women we need in our society, to stand up and speak for their rights. We can't all be Joan of Arc, but we can achieve what she had lived by - to have passion and love for the life we are living. Women have come a long way from being tasked with discriminative chores in the household to having influential power to develop the nation. ...read more.

Back in the 15th century, the idea of women fighting on the battlefield is outrageous. Joan of Arc was one who dared to challenge what was conventional and maintained her set of beliefs in living her life honourably. Women like these were paramount in define the age of feminism today. We can see from such examples that when placed in positions of power, women are able to do just as well as men. Besides power in governmental positions, some women have the power to influence people through their works and their actions. Joanne Kathleen Rowling was one who inspired my life. Most adults would turn a deaf ear and roll their eyes whenever I mention this to them, probably because they are so tired of hearing that. Harry Potter and the Order of the Phoenix was the first of the series I read when I was nine with only slight background knowledge on this scrawny boy wizard. However, Rowling's writing managed to keep my eyes on those pages right till the very end. ...read more.