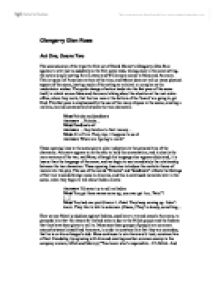 Glengarry Glen Ross Act One, Scene Two The second scene of the tripartite first act of David Mamet's Glengarry Glen Ross appears to start just as suddenly as the first scene ends, taking place in the same setting, the action simply cutting from Levene and Williamson across to Moss and Aaronow. This is typical of American writers of the time, and Mamet does not tell us many physical aspects of the scene, leaving much of the setting as minimal or complex as the reader/actor wishes. The quick change of action leads into the fast pace of the scene itself, in which we see Moss and Aaronow talking about the situation at the real estate office, where they work, that the two men at the bottom of the 'board' are going to get fired. This fast pace is emphasised by the use of the many ellipses in the scene, creating a realistic, harried conversation between the two characters: Moss Polacks and deadbeats Aaronow ...Polacks... Moss Deadbeats all Aaronow ...they hold on to their money... Moss All of 'em. They, hey: it happens to us all Aaronow Where am I going to work? These opening lines to the scene give a clear indication to the personalities of the characters. ...read more.

He does, in fact, want Aaronow to steal the premium leads from the office that night, so that they can sell them in order to keep their jobs. Moss manipulates Aaronow in yet another fast-paced, frenzied conversation, in order to convince him that it is he who must steal the leads, and he alone: Moss Yes. It is, George. (Pause.) Yes. It's a big decision. (Pause.) And it's a big reward. (Pause.) It's a big reward. For one night's work. (Pause.) But it's got to be tonight. [...] Aaronow You have to steal the leads tonight? [...] Aaronow You're, you're saying so you have to go in there tonight and... Moss You... Aaronow I'm sorry? Moss You. Here we see how Moss manipulates Aaronow, beginning by addressing him using his forename, George. Whereas the use of the surname would assert his authority over Aaronow, by using his forename Moss, yet again, creates a false impression of comradeship. He then goes on to use emphatic repetition in order to ensure he has Aaronow's full attention. The words which are repeated are also very important: the repetition of "big" and "reward" continue Moss' persuasion and help to emphasise his apparent feelings about how huge the situation really is. ...read more.

If it was just an idea, if they were not really 'talking' about it, but simply 'speaking', he cannot be linked to crime after it has happened. This conversation continues, as disjointedly as the rest of the scene, until both Aaronow and the audience are just as confused as each other, until we learn Moss' true intentions: he wants Aaronow to commit the crime of robbery, alone, and not turn him in. After ensuring that Aaronow wouldn't turn him in to the authorities, Moss proceeds to reveal that he would not help Aaronow if he was in the same situation, claiming that even if the robbery isn't committed by Aaronow, he is still an accessory. When asked why, he proceeds to claim "because you listened." In this emphatic ending to the scene, we see how Moss has now asserted the fact that he has complete power over Aaronow, and the differences between 'hearing' and 'listening' immediately come to mind, and links are made to the somewhat proleptic conversation beforehand. Whereas if there was a chance that Moss would be affiliated with the crime, they were simply 'speaking'. Now that there is no way Moss can be linked, Aaronow becomes an accessory because he 'listened', perhaps considered as the parallel to 'talking'. After this we must ask ourselves: are we all affiliated to crimes, just by 'hearing', if actually, somebody can claim we were 'listening'? ...read more.