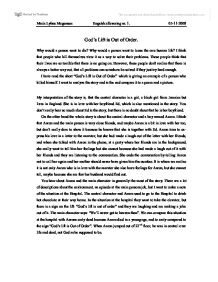 god's lift is out of order

God's Lift is Out of Order. Why would a person want to die? Why would a person want to loose the rare human life? I think that people who kill themselves view it as a way to solve their problems. These people think that their lives are so terrible that there is no going on. However, these people don't realize that there is always a better way out, that all problems can somehow be solved if they just try hard enough. I have read the short "God's Lift is Out of Order" which is giving an example of a person who killed himself. I want to analyze the story and in the end compare it to a poem and a picture. My interpretation of the story is, that the central character is a girl, a black girl from Jamaica but lives in England. She is in love with her boyfriend Ed, which is also mentioned in the story. You don't really hear so much about Ed in the story, but there is no doubt about that he is her boyfriend. ...read more.

We can compare this situation at the hospital with Aarons early dead because Aaron died in a young age, and to early compared to the sign "God's lift is Out of Order". When Aaron jumped out of 22nd floor, he was in control over life and dead, not God as he supposed to be. In the end of the story the central character is going to a party in a huge house, which is only for rich men. She is walking around by herself when she recognizes one of her friends in the Kitchen, who ask if she knows what has happened to Aaron. A lot of thoughts go through her mind before the guy tells her what happened. My first impression is that the main character feels guilty about what had happened because of the party where she would not tell Aaron her real feelings because of her friends, who were sitting in the background listening, and because she told him never to call her again. Her thoughts in the end, when she had the conversation with her friend in the kitchen, are very clear because she is thinking about the last time she spoke with Aaron, and she really feels guilt because of the things she had said to Aaron. ...read more.

I also see the door as a symbol of the door into heaven. As an adult Aaron has lived a terrible with a lot of drugs and now he has opened the door to heaven which is a more lighter place to live. The poem by Stevie Smith is a poem about a man who is now dead. He used to have a run around and have fun but now he had drowned himself. I think the way the man is presented is a lot like Aaron is presented. Their situation is the same, they used to have a lot of fun but now their life has turned into a misery, in Aaron's case it is a life with drugs. Instead of helping, friends around them just pity them and would not accept their problem you can see that in the poem in line 3, where it says, "I was much further out than you thought". The fact that there is now one who is really helping them is what really kills the man in the poem and Aaron in the end. ?? ?? ?? ?? Maria Lyhne Mogensen Engelsk aflevering nr. 1. 05-11-2008 ...read more.