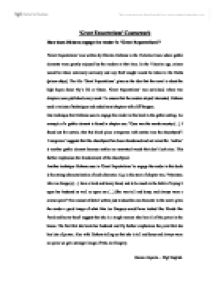 Also with Dickens telling us that she is tall and bony and always wore an apron we get a stronger image of Mrs Joe Gargery. A further technique that Dickens uses to engage the reader in this story is the structure of how he ends each paragraph. For example at the end of chapter two, "got a file from among Joe's tools. Then I put the fastenings as I had found them, opened the door at which I had entered when I ran home last night, shut it, and ran for the misty marshes. This is a cliff-hanger because we don't want Pip to get caught stealing as he takes the things to the convict. Another example of a cliff-hanger is at the end of chapter four the chapter is ended as follows. "I ran head foremost into a party of soldiers with their muskets: one of whom held a pair of handcuffs to me, saying, 'Here you are, look sharp, come on!" ...read more.

Victorians would have found this funny but if it was written in a story at the present time the readers would think that it was harsh and child abuse. This quote also has a rhyme to it which makes it more memorable. Dickens included dialogue of all characters to engage the reader in 'Great Expectations'. In chapter 7, Mrs Joe says, "if this boy ain't grateful this night, he never will be!". Dialogue makes the novel more interesting because it adds variety to it. Dickens included both 1st person and 3rd person throughout the story. If you try to read a book written all in the 3rd person, it would be tedious. Having dialogue also teaches us more about the characters and the way they speak. From the quote we can see that Mrs Joe is speaking informally because she says "aint" which is colloquial speech for "is not". We learn more about the characters personality when dialogue is included and it also makes the novel more interesting so the reader is likely to continue reading. ?? ?? ?? ?? Osama Alqasim - 10g2 English. ...read more.