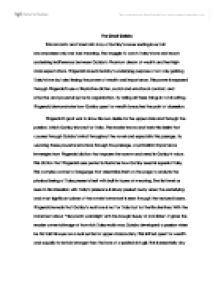 The Great Gatsby This romantic and traumatic story of Gatsby's never ending love trail encompasses only one true meaning. The struggle to catch Daisy's love and reach underlying indifference between Gatsby's Phantom dream of wealth and her high-class expectations. Fitzgerald reveals Gatsby's underlying purpose of not only gaining Daisy's love but also flexing the power of wealth and importance. This power is exposed through Fitzgerald's use of illustrative diction, social and emotional contrast, and effective and powerful syntactic organization. By taking all these things in to his writing, Fitzgerald demonstrates how Gatsby quest for wealth breaches the point of obsession. Fitzgerald's goal was to show his own desire for the upper class and through the passion, which Gatsby showed for Daisy. The reader knows and feels this desire that courses through Gatsby's mind throughout the novel and especially this passage. By weaving these powerful emotions through the passage, a symbolistic importance immerges from Fitzgerald diction that exposes the sorrow and need in Gatsby's voice. This diction that Fitzgerald uses perfectly illustrates how Gatsby sees his superior Daisy. ...read more.

This indifference and separation is the only factor that set them apart. His quests for wealth in order to be like daisy has sent him on this addiction to out show and fantasize about what his life could be. His deceiving perspective shows only happiness through the power of love but this transparent one is easily outweighed with the greed and power hungry corruption of the upper class. This extensive description of Daisy leads the readers not only in this passage but also in the rest of the novel to the thought of obsession. A man who talks endlessly about this woman in her "Beautiful house" and her stunning presence that he cannot live without. This all points to a fascination that goes way beyond the common likeability. This is where the context of false love and quest just on terms of self-prophecy and wealth betterment come into play. He always describes what she has. He never talks about her body or what she says. It is always about how much of something she has. ...read more.

When he entered Daisy house he had a taste of what it could be like. He had that first feeling of "Security" On the contrary, this sense of "Security" is overlooked by Fitzgerald's readers. A security that Fitzgerald wants the readers to see is one that is present in wealthy families. The notion of financial security is what Gatsby is referencing. Money can buy anything in the world and when it is readily available, the dream Gatsby thrived for is a possibility. He showed the reader how the upper classes have built this buffer from the cruel and dirty outside world. As said by Gatsby himself "Wealth imprisons and preserves". Sadly, looking from the outside in, Gatsby now develops that want and need to get inside Daisy's wealth bubble and soak up all it can offer. Another point to be made about Fitzgerald's passage about Gatsby's and his quest for wealth is the association Gatsby made with Daisy. Toward the end of the passage the sentence "Daisy, gleaming like silver, safe and proud about the hot struggles of the poor". This is the most important sentence of the passage. Fitzgerald sums it up for the reader her and the corruptness of upper-class flowers before the reader's eyes. ...read more.