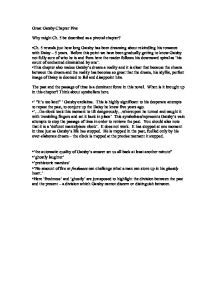 Great Gatsby Chapter Five Why might Ch. 5 be described as a pivotal chapter? � Ch. 5 reveals just how long Gatsby has been dreaming about rekindling his romance with Daisy - 5 years. Before this point we have been gradually getting to know Gatsby not fully sure of who he is and from here the reader follows his downward spiral as 'his count of enchanted diminished by one'. � This chapter also makes Gatsby's dream a reality and it is clear that because the chasm between the dream and the reality has become so great that the dream, his idyllic, perfect image of Daisy is doomed to fail and disappoint him. The past and the passage of time is a dominant force in this novel. When is it brought up in this chapter? Think about symbolism here. � ' "It's too late!" ' Gatsby exclaims. This is highly significant to his desperate attempts to repeat the past, to conjure up the Daisy he knew five years ago. � '...the clock took this moment to tilt dangerously...whereupon he turned and caught it with trembling fingers and set it back in place' This symbolises/represents Gatsby's vain attempts to stop the passage of time in order to retrieve the past. ...read more.

He literally glowed; without a word or a gesture of exultation a new well-being radiated from him and filled the little room.' � As well as being exhilarated by Daisy's presence this is where Gatsby's dream is about to come into fruition and be realised but what he cannot understand yet is that Daisy will inevitably fall short of his dreams. The fact that his radiance fills the 'little room' already suggests that it is too much, that Daisy could never hope to live up to his grand expectations. This is the climax of Gatsby's dream. From here it can only disappoint him. � 'It took me just three years to earn the money that bought it.' � Gatsby has clearly worked very hard to attain and realise his dream - Daisy. He knows he was not worthy of her five years ago and now he feels with an ostentatious, meretricious display of wealth and material possessions that he can win her back. '... I think he revalued everything in his house according to the measure of response it drew from her well-loved eyes. ...read more.

Write a detailed commentary of 'Possibly it had occurred to him that the colossal significance...' � The green light is one of the most important symbols in the book. It symbolises Gatsby's dream of winning back Daisy. When he stares at the light he adorns and embellishes Daisy with qualities she could never hope to fulfil in reality. We can look back at chapter one: � 'But I didn't call to him...he stretched out his arms toward the dark water in a curious way, and , far as I was from him, I could have sworn he was trembling. Involuntarily, I glanced seaward, and distinguished nothing except a single green light, minute and far away, that might have been the end of a dock.' � 'stretched out' and 'trembling'. It is not until chapter 5 that we realise the true significance of this light. � The green light is also an image which recurs throughout the novel - representing the hope felt by the Dutch sailors when they saw the green breast of land that was America - yet the American Dream , just like Gatsby's dream, is often bound to fail because it goes too far beyond the potential of reality. ...read more.