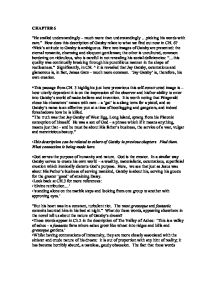 CHAPTER 6 "He smiled understandingly - much more than understandingly ...picking his words with care." How does this description of Gatsby relate to what we find out now in CH. 6? � Nick's attitude to Gatsby is ambiguous. Here two images of Gatsby are presented: the eternal romantic, charming and eloquent gentleman; the other is uncultured, common bordering on ridiculous, who is careful in not revealing his social deficiencies: "...this quality was continually breaking through his punctilious manner in the shape of restlessness." Significantly, in CH. ^ it is revealed that Jay Gatsby, ostentatious and glamorous is, in fact, James Gatz - much more common. 'Jay Gatsby' is, therefore, his own creation. � This passage from CH. 3 highlights just how precarious this self-constructed image is - how utterly dependent it is on the impression of the observer and his/her ability to enter into Gatsby's world of make-believe and invention. It is worth noting that Fitzgerald chose his characters' names with care - a 'gat' is a slang term for a pistol, and so Gatsby's name is an effective pun at a time of bootlegging and gangsters, and indeed foreshadows how he is killed. "The truth was that Jay Gatsby of West Egg, Long Island, sprang from his Platonic conception of himself. ...read more.

� "The very phrases were worn so threadbare that they evoked no image except that of a turbaned 'character' leaking sawdust at every pore..." � This can be related to his mythical stature. � The 'contour' described here consists only of an immature 17 year old's romantic self-idealisation. Gatsby is, therefore, trapped in a timeless past which allows him no chance to develop any understanding of life's complexities. � Tom says "She has a big dinner party...They meet all kinds of crazy fish." Explain the irony in Tom's remark here. What does it reveal about him? � He is having a very indiscreet affair with Myrtle Wilson. He is completely oblivious (blind) to his own hypocrisy. Again, the image of blindness is implied relating to the more widespread blindness of a very irresponsible society. What does Nick mean when he says, "It is invariably saddening to look through new eyes at things upon which you have expended your own powers of adjustment." � Here, he is adjusting his vision to Daisy's snobbish values. Her snobbishness destroys his own romantic vision of Gatsby's world. He tells the reader about this party: "There were the same people, or at least the same sort of people, the same profusion of champagne, the same many-coloured, many-keyed commotion, but I felt an unpleasantness in the air, a pervading harshness that hadn't been there before." ...read more.

She is here because "in the very casualness of Gatsby's party there were romantic possibilities totally absent from her world." CH.6 starts marking the end of Gatsby's glowing dream. Can you find a quotation to highlight this? � "He broke off and began to walk up and down a desolate path of fruit rinds and discarded favours and crushed flowers." � "Can't repeat the past? he cried incredulously. "Why of course you can!" He looked around him wildly as if the past were lurking here in the shadows of his house, just out of reach of his hand." � Gatsby is indeed delusional and has no concept of reality. "His heart beat faster and faster...and the incarnation was complete." Comment on this paragraph. � This is the moment his dream is realised. It is from this point that Nick imagines he has become obsessed by the need to relive this moment. Daisy's "perishable breath" reminds us that she is human, subject to the change and decay of time but "incarnation" conveys the intensity and dedication of Gatsby's vision. � Daisy 'blossomed for him like a flower.' - again this ephemeral image is associated with Daisy elsewhere in the novel. We are reminded that flowers die; they are 'perishable' and so Gatsby's great dream is always doomed to fail. "What I had almost remembered was uncommunicable forever." � How does this relate to Gatsby's dream? � The past is 'uncommunicable' - it cannot be repeated. ...read more.