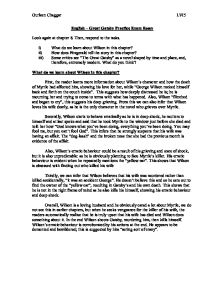 English - Great Gatsby Practice Exam Essay Look again at chapter 8. Then, respond to the tasks. i) What do we learn about Wilson in this chapter? ii) How does Fitzgerald tell the story in this chapter? iii) Some critics see "The Great Gatsby" as a novel shaped by time and place, and, therefore, extremely modern. What do you think? What do we learn about Wilson in this chapter? First, the reader learns more information about Wilson's character and how the death of Myrtle had affected him, showing his love for her, while "George Wilson rocked himself back and forth on the couch inside". This suggests how deeply distressed he is; he is mourning her and trying to come to terms with what has happened. Also, Wilson "flinched and began to cry", this suggests his deep grieving. From this we can also infer that Wilson loves his wife dearly, as he is the only character in the novel who grieves over Myrtle. Secondly, Wilson starts to behave erratically as he is in deep shock, he mutters to himself and at last spoke and said that he took Myrtle to the window just before she died and told her how "God knows what you've been doing, everything you've been doing. You may fool me, but you can't fool God". This infers that he strongly suspects that his wife was having an affair. ...read more.

Fitzgerald lets Gatsby tell Nick what had happened between him and Daisy, but we as a reader know that Gatsby is a mistrustful character and he lied about what his youth was really like in the previous chapters, so it the readers' decision whether or not to believe Gatsby. However, Nick is moved by Gatsby's story and is sincerely worried about Gatsby - "I didn't want to go to the city... I didn't want to leave Gatsby". This shows the concern that Nick has for Gatsby, and through this, we as a reader share the same concern. Alternatively, to structure this chapter effectively Fitzgerald uses time frames; this is linked to the narrative voices. Nick starts off by continuing the story and telling the reader about Gatsby's last hours, this moves the plot forward but it also moves it backwards. This links to what happened at the garage the night before. Nick says, "Now I want to go back a little and tell what happened at the garage after we left there the night before." Nick goes onto telling the reader about Wilson, and how he is coping with the death of his wife, Myrtle Wilson. Wilson slowly works out what happened and who murdered Myrtle. Fitzgerald tells the story in this way because he is creating suspense for the readers and the plot is thickening as Nick goes further and further into the story. ...read more.

Gatsby spends a significant amount of time focusing on the green light. The light represents Daisy as he remembers, or the Daisy he wants to remember. Even if his memories of Daisy are ones from the past or completely made up, to Gatsby the light is the perfect Daisy. However, in this chapter, Gatsby's hopes are shattered, he said wanly, "I waited, and about four o'clock she came to the window and stood there for a minute and then turned out the light. Fitzgerald uses a variety of different language techniques in chapter eight, such as poetic language in Gatsby's description of his love for Daisy in order to create imagery for the reader. "She was the first "nice" girl he had ever known... He found her excitingly desirable". Fitzgerald uses effective language to emphasise the love that Gatsby has for Daisy. He also creates a contrast between emotive language used by Wilson and the detached language used by Gatsby (at the beginning) in relation to the accident. Furthermore, at the end of the chapter Fitzgerald uses sparse language when writing about the death of Wilson and Gatsby; this is a huge contrast to the detail Nick gives us when talking about his opulent parties. "...One of Wolfsheim's prot�g�s - heard the shots" and the "holocaust was complete", was the only description given about the death of Wilson and Gatsby. In conclusion, Fitzgerald uses a variety of different and interesting devices in order to tell the exciting and vibrant story in chapter eight. ?? ?? ?? ?? Gurleen Chaggar LVI5 ...read more.