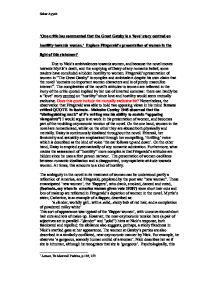 'One critic has commented that the Great Gatsby is a 'love' story centred on hostility towards women.' Explore Fitzgerald's presentation of women in the light of this statement' Due to Nick's ambivalences towards women, and because the novel moves towards Myrtle's death, and the emptying of Daisy of any romantic belief, some readers have concluded a hidden hostility to women. Fitzgerald's presentation of women in "The Great Gatsby" is complex and ambivalent despite his own claim that the novel 'contains no important woman characters and is of purely masculine interest'1. The complexities of the novel's attitudes to women are reflected in the irony of the critic quoted implied by her use of inverted commas: there can hardly be a "love" story centred on "hostility" since love and hostility would seem mutually exclusive. Does this quote include the mutually exclusive bit? Nevertheless, the observation that Fitzgerald was able to hold two opposing views in his mind famous critical QUOTE in footnote- Malcolm Cowley 1945 observed that the "distinguishing mark" of F's writing was his ability to sustain "opposing viewpoints"] I would argue is at work in his presentation of women, and becomes part of the troubling oxymoronic tension of the novel. On the one hand, women in the novel are romanticised, whilst on the other they are abused both physically and mentally. Daisy is continuously idealised throughout the novel. Ethereal, her femininity and sexuality are emphasised through her compelling, 'thrilling' voice which is described as the kind of voice 'the ear follows up and down'. On the other hand, Daisy is emptied systematically of any romantic admiration. Furthermore, what makes the assessment of "hostility" more complex is that Fitzgerald's attitudes are hidden since he uses a first person narrator. The presentation of women oscillates between romantic idealisation and a disappointed, unsympathetic attitude towards women. At times, this amounts to a kind of hostility. The ambiguity in the novel in its treatment of women can be understood partly a reflection of America, and Fitzgerald, perplexed by the post war "new woman". ...read more.

The imagery of birds is used here although the women are still presented as weightless and therefore lacking substance. Moreover, Fitzgerald, in a letter to Edmund Wilson said that he 'gave no account of (and has no feeling about or knowledge of) the emotional relations between Gatsby and Daisy from the time of reunion to catastrophe' (footnote) . Fitzgerald likens Daisy to a 'grail', a religious image of the grail cup used by Jesus at the Last Supper. Nick describes the scene of Gatsby patiently waiting as a 'vigil' which again suggests that their love is almost transcendent. These religious references elevate Gatsby's love for Daisy. Gatsby is a faithful lover and devoted lover; he is often associated with Romantic imagery such as moonlight and starlight: 'across the moonlight...and was standing with his hands in his pockets regarding the silver pepper of the stars' This image of Gatsby standing in the moonlight stretching out to the green light presents him as a romantic, yearning for his love. However this is romantic image of him is juxtaposed with the era in which he lives, where such an ideal would be inimical. The extent of Gatsby's devotion to Daisy is also shown by Wolfensheim: 'He would never so much as look at a friend's wife'. This idealisation of Daisy is in fact an act of violence. Equivalent to emotional abuse from a feminist point of view, as it is as if he sees Daisy as a 'prize' or something that he is working to possess. Daisy simply becomes a p**n of male fantasy, a fantasy which had 'gone beyond her, beyond everything'. The illusion of Gatsby's dream means that Daisy could never live up to Gatsby's vision of her and implies that his dream is not of Daisy herself. Furthermore, a certain violence enters the account of the earlier affair. Gatsby's love of Daisy is inextricably linked with the love of money and glamour, 'Her voice is full of money'. ...read more.

This quotation shows the patronising attitude of men and Nick very well. Men condemn women for being dishonest and expect it however men are not condemned for dishonesty. I think I gave you a photocopied sheet on the nightmare/woman Try and make this section tighter and argue: hostility to women - or, in fitz, if not in Nick, a sense of the pathos of woman, her violation and vulnerability within this world. This could lead onto final point about I've looked through my sheets but cant find anything on this.... It can be seen that Fitzgerald is continually emphasising a relationship between love and money thorough all the characters in the novel. We see this through Myrtle's relationship with Tom as she is attracted to his image and wealth and also in Tom and Daisy's relationship. Daisy returns back to Tom, as she was sure of a secure and safe future. Gatsby spends his whole life earning money to acquire a large house and fortune in order to eventually acquire Daisy herself. Nick too, is impressed by Gatsby's fortune and finds Jordan's fame appealing. Fitzgerald inextricably links Gatsby and Daisy's 'love' to the love of money and glamour prevalent in the 'booming 20's' which is shown through Gatsby referring to Daisy as though she is an item of 'value'. It is not only women who are presented as flawed however, men too are presented as imperfect by Fitzgerald; the only difference is that they are not condemned for their flaws as women are. The world of 'The Great Gatsby' like the world of 'The Waste Land' precludes love. Love cannot exist in such a world of death, represented by the Valley of Ashes. The thirst for love and its impossibility in such a place of death is the anguish of 'The Waste Land' where Eliot seems to 'mourn' the violation and destruction of women. Fitzgerald seems to take these elements of 'The Waste Land' into account although at points of the novel, seems to indulge in them. ...read more.