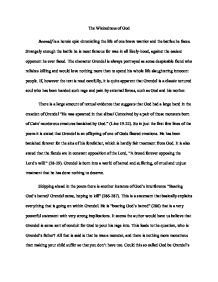 Grendel Character Analysis. There is a large amount of textual evidence that suggests that God had a large hand in the creation of Grendel

The Wickedness of God Beowulf is a heroic epic chronicling the life of one brave warrior and the battles he faces. Strangely enough the battle he is most famous for was in all likely-hood, against the easiest opponent he ever faced. The character Grendel is always portrayed as some despicable fiend who relishes killing and would love nothing more than to spend his whole life slaughtering innocent people. If, however the text is read carefully, it is quite apparent that Grendel is a classic tortured soul who has been handed such rage and pain by external forces, such as God and his mother. There is a large amount of textual evidence that suggests that God had a large hand in the creation of Grendel "He was spawned in that slime/ Conceived by a pair of those monsters born of Cain/ murderous creatures banished by God." ...read more.

that is a very powerful statement with very strong implications. It seems the author would have us believe that Grendel is some sort of conduit for God to pour his rage into. This leads to the question, who is Grendel's father? All that is said is that he was a monster, and there is nothing more monstrous than making your child suffer so that you don't have too. Could this so called God be Grendel's father? While there is very little textual support for this claim the implications are very strong. So now it can be said that Grendel is ultimately not responsible for his crimes, God was using him to syphon off his own human emotions. Now God was not the only external force that turned Grendel into a monster, his mother, as quoted above, is a murderous monster. ...read more.

(30-32). The poem states right there that he went with nothing but curiosity in his heart, that unfortunately would soon change "The monster's/ thoughts were as quick as his greed or his claws:/ He slipped through the door and there in silence/ Snatched up thirty men, smashed them/ Unknowing in their beds and ran out with their bodies" (34-38). The text states that he was filled with greed, but whose greed was it? His or perhaps God's? Many of the questions posed above simply can't be answered, but they do bring up some interesting points and show a new way of looking at the classic tale. Perhaps the monster should be pitied instead of hated. If God is pouring his negative human emotions into him then there is naught Grendel can do about it. Grendel is in reality just "The wickedness of God". Beowulf. Trans. Burton Raffel. The British Tradition. Boston: Pearson Prentice Hall, 2007. 40-62. Print. ?? ?? ?? ?? ...read more.