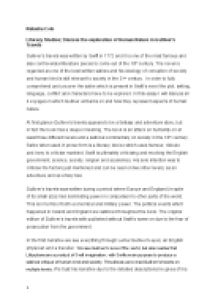 Guillivers Travels. In this essay I will discuss all 4 voyages in which Gulliver embarks on and how they represent aspects of human nature.

﻿Natasha Cole Literacy Studies; Discuss the exploration of Human Nature in Gulliver?s Travels Gulliver?s travels was written by Swift in 1772 and it is one of the most famous and also controversial literature pieces to come out of the 18th century. The novel is regarded as one of the best written satires and his ideology of corruption of society and human kind is still relevant to society in the 21st century. In order to fully comprehend and uncover the satire which is present in Swift?s novel the plot, setting, language, conflict and characters have to be explored. In this essay I will discuss all 4 voyages in which Gulliver embarks on and how they represent aspects of human nature. At first glance Gulliver?s travels appears to be a fantasy and adventure story, but in fact the book has a deeper meaning. The book is an attack on humanity on at least three different levels and a satirical commentary on society in the 18th century. Satire when used in prose form is a literacy device which uses humour, ridicule and irony to criticise mankind. Swift is ultimately criticising and mocking the English government, science, society, religion and academics. His sole intention was to criticise the factors just mentioned and can be read on two other levels; as an adventure and as a fairy tale. Gulliver?s travels was written during a period where Europe and England (in spite of its small size) had dominating power in comparison to other parts of the world. This is in terms of both economical and military power. The political events which happened in Ireland and England are satirized throughout the book. The original edition of Gulliver?s travels with published without Swift?s name on due to the fear of prosecution from the government. In the first narrative we see everything through Lemur Gulliver?s eyes; an English physician and a traveller. ...read more.

His referencing to magnifying of flesh could also be linked to the recent discovery of the microscope. Due to his size he is seen as a hero in the lands of Lilliput. However, this is no longer the case in Brobdingnag even his greatest feats such as battling rats in a heroic fashion are merely seen as ?tricks?. Swift continually uses and plays on language to emphasize the main satirical points about politics, ethics and culture and language. For example, whilst Gulliver is out at sea, he describes the ways in which his ship deals with the oncoming storm in a complicated naval jargon fashion. (Spark notes) Swift was ridiculing the lexis and narrative of writers of travel books and sailing accounts that often used special words or expressions that made it difficult for others to understand. Swift saw this as unnecessary and ridiculous and the use of complicated, long words was merely to show off their expertise. ?During the storm, which was followed by a strong wind west-south west, we were carried by my computation about five hundred leagues to the east.? (Jonathon Swift 1726 1:62) This style is repeated throughout the book to criticize experts who were more interested in being impressive rather than helpful. Gulliver describes the cultures and politics to the King of Brobdingnag; these life and death issues in Europe are merely seen as insignificant to the King. ?He was perfectly astonished ?protesting it was only a heap of conspiracies, rebellions, murders, massacres?? (Jonathon Swift 1726 6:98) He sees the physical size of the Europeans as being matched by their moral weakness and (Spark notes) the king describes the conflicts of the ?little people? as ?odious. Gulliver ultimately feels humiliated from their discussions. (spark notes) Gulliver is unable to realise the imperfections of his own society very much like the Lilliputians. The giants have a well-organised, equal society which puts society before their own individual gain. ...read more.

He returns to England but cannot return to a normal life due to his admiration and lifestyle he had amongst the Houyhnhnm. He spends his days speaking to the horses in his stables. Some critics suggested that although Swift was criticising mankind he did believe that people were capable of changing their ways. His hope was that his novel would enable people to re-evaluate their behaviour. It was however said that especially towards the end of the book Swift was losing his mind. Merrel D Clubb was quoted as saying "the longer that one studies Swift, the more obvious it becomes that the interpretations and verdict to be placed on the 'Voyage to the Houyhnhnms' is, after all, the central problem of Swift criticism." The Houyhnhnms and Yahoos represent aspects of human nature. Early day critics would have believed Gulliver was used to voice Swifts opinions of humanity. Morden critics would appreciate the subtleties presented through Gulliver. It is argued whether Gulliver has set character traits or goes through a transformation. I would believe with the latter as by the forth voyage we see Gulliver turn against his own species. Critics also have to be careful when assuming Gulliver’s opinions represent those of Swifts as this may not always be the case. The irony and satire is complex therefore we cannot settle on one single interpretation. The book examines human nature through every character Gulliver meets. This first voyage is a critique of the political happenings of the early eighteenth century as well as a criticism of people’s desire for wealth and power. The voyages that Gulliver travels on represent aspects of corruption in England and mankind. Gulliver himself is presented as a naïve and gullible character which in turn reflects the irony of the English system. It is believed Gulliver suggests gullible. Gulliver is not the same man by the end of the story in fact we see his perceptions of people changed through every adventure. Altogether, Swift has not painted a pretty picture of society and it’s morals. [a]Do you want to move this up where you are talking about religion ...read more.