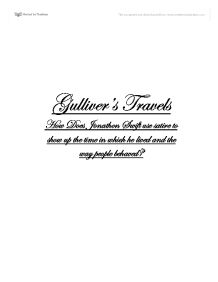 Gulliver's Travels - How Does Jonathon Swift use satire to show up the time in which he lived and the way people behaved?

Gulliver's Travels How Does Jonathon Swift use satire to show up the time in which he lived and the way people behaved? How does Swift use Satire to show up the times in which he lived and the ways in which people behaved? In finding the true meaning of satire you must read Gulliver's Travels. I understand Satire to mean: the usages of sarcasm, irony, ridicule and scorn in a way to criticize vices. In this context vices are countries and the way they are run. The ways in which the people in charge pass any law if they want. The petty reasons for war, Reward Systems, etc.... Jonathon Swift had lived in the 18th Century and had seen everything that had happened. This book puts forward his feeling to the time in which he lived. Swift uses many techniques of satire, the one I feel is most prevalent is, Ridicule. He uses this on various occasions. The time which stands out most is when Gulliver sees The Emperor holding a stick which is either leaped or crept under by various candidates. The one that stays in the longest is rewarded. Here Swift is ridiculing reward systems. He's saying that the ones that complement the person in charge most will be rewarded. Whoever 'Creeps' the lowest will be rewarded. They are each given different colours by coming first, second and third. Swift says, "You see few great persons about the court who are not adorned with one of these girdles." ...read more.

They were just as common as they are today. Finally Swift uses another little piece of irony when he's threatened in Lilliput with a 'little' punishment: gauging out his eyes. Swift now uses irony because Gulliver has done so many good things but all that is forgotten and he's being punished for one little thing. I find this ironic. The Emperor thinks he's doing Gulliver a favour by just gauging out his eyes. At this time in England people were being hung for stealing. Basically anything was being punished with something as bad as being killed. Swift seems to go over the top slightly some times, exaggeration. The biggest example of this is when the Yahoos drink alcohol they do various silly things as Gulliver describes, 'They would howl and grin and chatter, and reel, and tumble, and then fall asleep in the dirt.' As well as using exaggeration here he uses repetition. He mentions this on three occasions in the last chapter. I think when he tells us about the flying Island in Laputa he goes a little far. Descending over a country and blocking out the sun is going a bit far. It's not as if England would have gone that far to show their rule over Ireland. I liked the way that Swift satirises how wars are started. They're started by petty disagreements. In this case it's the side the egg is cracked open. ...read more.

The women now seem so ugly now that he's small. In the last two paragraphs of Book Four Swift attacks pride. He calls it the worst of all Human vices. Nothing compares to it as Swift says '...but when I behold a lump of deformity and diseases both in body and mind, smitten with pride, it immediately breaks all measures of my patience.' He shows that the Houyhnhnms have no word for pride and he saw it amongst Yahoos. He hates pride so much he will not let anybody who has pride go anywhere near him. I think his satire still applies today. The same vices have applied since the beginning of time, s****l prostitution, Pimps, drugs, greed, avarice. Sloth all live on in todays societyin the 21st Century. Through the Yahoos Swift shows that the same things applied. The Houyhnhnms were shown as Swifts perfect race and they led Swifts perfect life. They only eat when they were hungry; they only drank when they were thirsty. There was no greed or avarice. This showed how bad the Yahoos way of living was. If he were still alive today Tony Blair and his Tory Party would be targets of his satire especially on the leaping and creeping front. I think he has been successful in this book, sometimes he does seem to go over the top and be to extreme but we can definitely identify with what he is saying, about the ways in which people behaved and the times which we live in. ...read more.