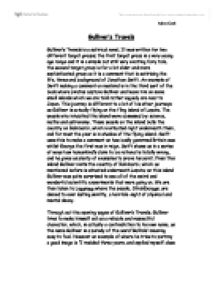 Gulliver's Travels Gulliver's Travels is a satirical novel. It was written for two different target groups; the first target group is a very young age range and it is a simple but still very exciting fairy tale, the second target group is for a lot older and more sophisticated group as it is a comment that is satirising the life, times and background of Jonathan Swift. An example of Swift making a comment on mankind is in the third part of the book where pirates capture Gulliver and leave him on some small islands which we are told rather vaguely are near to Japan. This journey is different to a lot of his other journeys as Gulliver is actually flying on the fling island of Laputa. The people who inhabited the island were obsessed by: science, maths and astronomy. These people on the island bully the country on Balnibarbi, which is situated right underneath them, and for most the year is in shadow of the flying island. Swift uses this to make a comment on how badly governed Britain was whilst George the first was in reign. Swift shows us in a series of ways how humankind's claim to be rational is totally wrong, and he gives us plenty of examples to prove his point. ...read more.

This style isn't particularly use to make fun of the reader but to make them think. At the same time as reading about any observations we are showed what Gulliver's feelings really are. As Gulliver was portrayed as a well-educated man from the star then all of Gulliver's opinions are valid to the reader and help, us to believe the sequence of events. The difficulty for the reader is that the sub characters of the story are not as well exposed to the audience and there for you don't get to know what their opinions are. In Gulliver's Travels the plot is a very strong feature as it is not only giving exciting action to the story but it brings out the emotions of Gulliver as he travels to different lands with different setting and going from big, to small, and from, smart, to animals as leaders. It also brings out the emotions and thoughts of Gulliver as he is forever reflecting back to life in England The first country that Gulliver visits is Lilliput, where Gulliver ends up shipwrecked. The Lilliputians are only a twelfth of the size of Gulliver, however they still were able to ties him up and managed to secure him as their prisoner. ...read more.

The people of Lilliput gain the emperors approval by demonstrating an acrobatic skill and therefore becoming courtiers or by leaping or crawling under a stick and winning a silken thread. Gulliver helps miniature horses perform by tying his handkerchief to sticks, making a platform for military displays, until a horse's hoof goes through the handkerchief and Gulliver considers it unsafe. The emperor is so impressed that he is persuaded to grant Gulliver more freedom of movement. 2 days later, Gulliver is requested to "stand like a colossus, with my legs as far as under as I conveniently could" whilst the army marches between them. The government debate Gulliver's freedom and as there is only one objection, he is granted his liberty after swearing to the eight conditions. Note the bizarre ritual Gulliver has to go to swear his obedience to the conditions, which were as follows. Gulliver must: not leave Lilliput without permission, give 2 hours warning of a visit, keep to the main roads as he walks, take care as he moves, carry messages when required, defend Lilliput from it's enemies, help with the building by lifting heavy stones, and finally, measure the kingdom. This chapter reflects King George's court under the Warpole Government. The seventh sentences Gulliver to hard labour in his leisure hours. Gulliver is allowed enough food to support 1728 Lilliputians. Adam Cook ...read more.