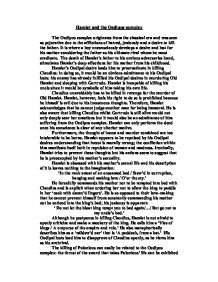 Hamlet and the Oedipus complex.

Hamlet and the Oedipus complex The Oedipus complex originates from the classical era and was seen as pejorative due to the afflictions of hatred, jealously and a desire to kill the father. It is where a boy unconsciously develops a desire and lust for his mother considering the father as his ultimate rival whom he must eradicate. The death of Hamlet's father to his envious adversaries hand, stimulates Hamlet's deep affections for his mother from his childhood. Hamlet's Oedipal desire leads him to procrastinate in killing Claudius: in doing so, it would be an obvious admittance to his Oedipal lusts: his enemy has already fulfilled his Oedipal desires in murdering Old Hamlet and sleeping with Gertrude. Hamlet is incapable of killing his uncle since it would be symbolic of him taking his own life. Claudius unavoidably has to be killed in revenge for the murder of Old Hamlet. ...read more.

He forcefully commands his mother not to be tempted into bed with Claudius and is explicit when ordering her not to allow the king to paddle in her 'neck with damn'd fingers'. He is so opposed to their love-making that he cannot prevent himself from constantly commanding his mother not be enticed into the king's bed; his jealousy is apparent: ' Do not let the bloat king tempt you to bed again/.../ But go not to my uncle's bed.' Although he postpones in killing Claudius, Hamlet is not afraid to openly criticize and make a mockery of the king. He calls him a 'Vice of kings / A cutpurse of the empire and rule.' He also metaphorically describes him as a 'mildew'd ear' that is 'A paddock, from a bat.' His Oedipal lusts lead him to disapprove of Claudius openly, as he views him as his archrival. ...read more.

He occasionally asks his mother to keep away from Claudius' bed rather than threatening her. In the same instant he cannot bear to depart from her chamber, even after saying goodnight to her more than five times displaying the affectionate side of his character. But on the other hand, Hamlet also goes out with Ophelia, which could mean that he is not entirely in love immorally with his mother. But the audience could easily take this to mean that Hamlet needs to be distracted from his feelings for Gertrude and by going out with Ophelia he does so. It could easily be an effortless attempt to render feelings of jealousy from Gertrude by his 'love' towards Ophelia. Hamlet is so cruel to Ophelia because he cannot be in a relationship that is not sustained by true love. He only seems to be doing what society deems acceptable by sharing a relationship with Ophelia whom is someone his own age: as a relationship with his mother would be unacceptable. ...read more.