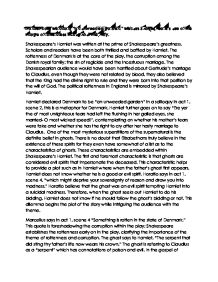 Hamlet calls Denmark an unweeded garden. Discuss Shakespeares use of the image of rottenness throughout the play.

Hamlet calls Denmark "an unweeded garden." Discuss Shakespeare's use of the image of rottenness throughout the play. Shakespeare's Hamlet was written at the prime of Shakespeare's greatness. Scholars and readers have been both thrilled and baffled by Hamlet. The rottenness of Denmark is at the core of the play, the corruption among the Danish royal family; the sin of regicide and the incestuous marriage. The Shakespearian audience would have been horrified about Gertrude's marriage to Claudius, even though they were not related by blood, they also believed that the King had the divine right to rule and they were born into that position by the will of God. The political rottenness in England is mirrored by Shakespeare's Hamlet. Hamlet declared Denmark to be "an unweeded garden" in a soliloquy in act 1, scene 2, this is a metaphor for Denmark, Hamlet further goes on to say "Ere yer the of most unrighteous tears had left the flushing in her galled eyes, she married- O most wicked speed!", contemplating on whether his mother's tears were fake and whether she has the right to cry after her hasty marriage to Claudius. ...read more.

Marcellus says in act 1, scene 4 "Something is rotten in the state of Denmark." This quote is foreshadowing the corruption within the play; Shakespeare establishes the rottenness early on in the play, clarifying the importance of the theme of rottenness and corruption. The ghost says to Hamlet, "The serpent that did sting thy father's life now wears his crown." The ghost is referring to Claudius as a "serpent" which has connotations of poison and evil. In the gospel of Matthew, Jesus tells the twelve apostles to be "wise as serpents, and harmless as doves". The Book of Revelation, however, implied a connection between the serpent of the Garden of Eden and Satan, and as a result the snake for Christians lost their earlier associations with wisdom and healing and became a symbol of evil. Hamlet says in act 1, scene 5 "The time is out of joint", this quote is connected to the earlier quote "something is rotten in the state of Denmark." ...read more.

Hamlet is explaining what happens to our bodies after we die and the reference to maggots is a direct reference to the corruption within Denmark. Hamlet feels he can no longer live in a world of chaos and corruption and contemplates about committing suicide and ending his misery. In the Hamlet's famous soliloquy "To be or not to be. That is the question." Hamlet is suffering from extreme melancholy and is debating whether it is best to live in a world of deceit and corruption or in a world of uncertainty, Hamlet attempts to solve his problems by metaphysical though. Hamlet remains one of Shakespeare greatest works due to the realism and diversity of the play. Shakespeare uses the image of rottenness in the play to suggest to the audience that a rotten king makes a rotten country and the greed and ego of one man can bring the country to its knees. Shakespeare achieves this by using metaphors; "unweeded garden" "serpent" and "maggots", Shakespeare uses the theme of corruption to evoke to the audience that "power corrupts and absolute power corrupts absolutely" ...read more.