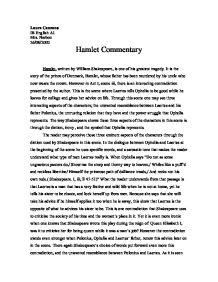 Laura Canzano IB English A1 Mrs. Narbon 26/08/2002 Hamlet Commentary Hamlet, written by William Shakespeare, is one of his greatest tragedy. It is the story of the prince of Denmark, Hamlet, whose father has been murdered by his uncle who now wears the crown. However in Act I, scene iii, there is an interesting contradiction presented by the author. This is the scene where Laertes tells Ophelia to be good while he leaves for college and gives her advice on life. Through this scene one may see three interesting aspects of the characters; the unwanted resemblance between Laertes and his father Polonius, the untrusting relation that they have and the power struggle that Ophelia represents. The way Shakespeare shows these three aspects of the characters in this scene is through the diction, irony , and the symbol that Ophelia represents. The reader may perceive those three eminent aspects of the characters through the diction used by Shakespeare in this scene. In the dialogue between Ophelia and Laertes at the beginning of the scene he uses specific words, and a sarcastic tone that makes the reader understand what type of men Laertes really is. ...read more.

This is proof of their unwanted resemblance. Irony is often used by Shakespeare in this scene. He uses it to make the reader ponder on the meaning of the actions and true personality of the characters in the scene. Again when Ophelia declares that she will accept the advice if Laertes does the same on his side, he changes the subject and tries to leave. However, his father, who enters at the same time, ironically gives him the same type of advice that Laertes just has given to Ophelia. Polonius tells Laertes how he should live his life when he goes away and Laertes just told Ophelia how to live her life when he is gone. This shows the resemblance between the father and the son. They both give advice before looking at themselves. The resemblance is further seen later in the play when Polonius sends a spy to see if his son is really studying or having fun. The reader can then draw the conclusion that when Polonius was young he too had a wild life, and knows what he was like at that age, therefore he expects the worse out of his son. ...read more.

This furthermore shows that she has control and power over her own life, showing another way Shakespeare defend women's position in society. This scene is of great importance to the play, for it is not only about a son leaving for college and a father giving him advice on life, and an obeying daughter; it is more Shakespeare's way to give the reader a perspective on his society. One may also notice that the struggle between Laertes and Polonius is a symbol for a greater struggle; the one between Hamlet and the King. In both cases they want to have control over a women, whether it be Ophelia or Gertrude, Hamlet's mom also known as the Queen. Polonius represent the King; who seems innocent to everyone, but to the audience, and Laertes represents the prince Hamlet. Hamlet is represented by Laertes in this scene because like Laertes he is trying to have control over a women that it is not for him to have control over, and they are both being spied on for their behavior by their fathers. Shakespeare could not have done away with this scene for it is crucial to the main plot, and to criticize his own society at the time the play was written. ...read more.