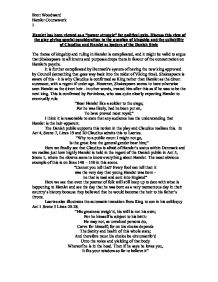 Hamlet has been viewed as a &quot;power struggle&quot; for political gain. Discuss this view of the play giving special consideration to the question of kingship and the suitability of Claudius and Hamlet as leaders of the Danish State.

Hamlet has been viewed as a "power struggle" for political gain. Discuss this view of the play giving special consideration to the question of kingship and the suitability of Claudius and Hamlet as leaders of the Danish State The theme of kingship and ruling in Hamlet is complicated, and it might be valid to argue that Shakespeare to all intents and purposes drops them in favour of the concentration on Hamlet's psyche. It is further complicated by Denmark's system of having the new king approved by Council (something that goes way back into the midst of Viking time). Shakespeare is aware of this - it is why Claudius is confirmed as King rather than Hamlet as the direct successor, with a regent if under age. However, Shakespeare seems to have otherwise seen Hamlet as the direct heir - in other words, treated him after this as if he was to be the next king. This is confirmed by Fortinbras, who was quite clearly expecting Hamlet to eventually rule. "Bear Hamlet like a soldier to the stage; For he was likely, had he been put on, To have proved most royal;" I think it is reasonable to state that any audience has the understanding that Hamlet is the heir-apparent. ...read more.

Take up the bodies. Such a sight as this Becomes the field, but here shows much amiss. Go bid the soldiers shoot" We also know about the support that Hamlet had from the general public, which I have previously discussed, and this certainly would have put him in a strong position to be a good leader. Hamlet is also a post graduate, which shows he is intelligent and that is a desired characteristic for a king. Despite all of these positives Hamlet still comes across as a weak, inexperienced, contradictive and indecisive individual. The main time we see all of these weaknesses in young Hamlet is when he is unsure of whether to take revenge on his uncle for killing his father. When he is alone he seems to have his mind set on revenging his father's murder but every time he has an opportunity to do so he convinces himself out of taking action. A good phrase to describe Hamlet is a "Brave Coward". When alone and in his thought Hamlet seems to be brave and courageous, seemingly making decisions on what he is to do, but cowards out of doing so at the last minute. ...read more.

I believe that Claudius was the right choice for king in the short-term but I believe in the long-term Hamlet would have made a better choice for king, however we know that the council had to decide on the short-term future of Denmark due to the impending war, so therefore I believe that, based on the evidence they had available, they made the correct decision appointing Claudius as the new king. This view is shared by many other readers of the play and they all believe that if Hamlet would have knew how his father died before Claudius was crowned then he would have made himself appear to be over his father's death just to stop Claudius becoming king and take a slight revenge against him in this way, but this wasn't to be the case in Shakespeare's dramatic play, instead we only find out that King Hamlet was murdered by his own brother Claudius, after Claudius becomes the new king and marries Gertrude. This could be another reason as to why Hamlet refuses to take revenge as killing the king is an act of blasphemy and punishable in a severe manner and maybe he was scared of the consequences of his actions. ?? ?? ?? ?? Brett Woodward Hamlet Coursework 1 ...read more.