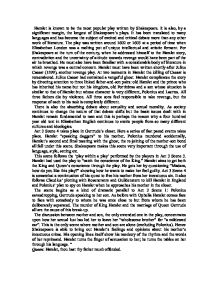 Hamlet is known to be the most popular play written by Shakespeare.

Hamlet is known to be the most popular play written by Shakespeare. It is also, by a significant margin, the longest of Shakespeare's plays. It has been translated to many languages and has become the subject of excited and critical debate more than any other work of literature. The play was written around 1602 or 1603 at a period of time when Elizabethan London was a melting pot of unique intellectual and artistic ferment. For Shakespeare at the turn of the century, when he addressed himself to the Hamlet story, contradiction and the uncertainty of attitude towards revenge would have been part of the air he breathed. He must also have been familiar with a considerable body of literature in which revenge was a central concern. Hamlet must have been written shortly after Julius Caesar (1599), another revenge play. At two moments in Hamlet the killing of Caesar is remembered. Julius Caesar had contained a vengeful ghost. Hamlet complicates the story by directing attention to three linked father-and-son pairs: old Hamlet and the prince who has inherited his name but not his kingdom, old Fortinbras and a son whose situation is similar to that of Hamlet but whose character is very different, Polonius and Laertes. All three fathers die by violence. All three sons feel responsible to take revenge, but the response of each to his task is completely different. There is also the absorbing debate about sexuality and s****l morality. As society continues to change the nature of that debate shifts but the basic issues dealt with in Hamlet remain fundamental to man and this is perhaps ...read more.

This argument between the mother and son shows the intense feelings of the strong love and affection that exists between them and this is a scene that grips the audience by its forceful language. The comparison of Hamlet's "god-like" father to the "mildewed ear" that Gertrude married shortly after his father's death shows that Claudius was absolutely not even a fraction of what his father was. Shakespeare emphasizes this comparison through the use of metaphors, similes and other language techniques. The audience is able to understand Hamlet's deep love and respect for his father through these lines. We see that he keeps on repeating the question "Have you eyes?" showing how he felt that her "sense is apoplexed". He mocks her by saying that what devil "hath cozened you at hoodman-blind?" meaning that she picked the worst of all people as a husband in her blindness. Hamlet is so raged that he is at breaking point and is really unable to in any way accept his mother's incestuous relationship and betrayal. All this time he was wondering "where is thy blush?" showing that he had hoped that his mother would realize much earlier the sin that she had committed and would turn away from it. The harsh words that he uses "turnest my [Gertrude's] eyes into my very soul" where she sees her incestuous sin as "such black and grained spots as will not leave their tinct". This shows the impact that Hamlet's language had on Gertrude. She is so fed up and exhausted that all she can do is beg him to "speak to me no more". ...read more.

This again contributes to the complexity of Hamlet's character. He "speak[s] daggers to her" in order to shame her into admitting her mistakes and joining his side which suggests that he suffers from Oedipus complex. Then again, he could just be advising her so that he could establish that bond between his father and mother so that Gertrude would not fall into the incestuous sin. He "do[es] not [want his mother to] spread the compost on the weeds to make them ranker." I feel Act 3 Scene 4 is really one of the most important scenes which builds up the plot of this tragedy. Had Polonius not have been murdered, Ophelia and Laertes would never have been involved in the plot and so Claudius would have been unsuccessful in his evil scheme to kill Hamlet. The complexity of Hamlet's character and the addition of characteristics also make this scene important. The complexity of his character is what makes him interesting and this also allows the audience to relate to him. The mother-son conflict and rejoining also seasons the play as this makes the scene a very important climax of the play. Shakespeare's use of language adds variety to the play and also keeps Hamlet's description of his words as daggers to one's heart true. In more simpler terms, Hamlet would have been a big failure if Act 3 Scene 4 was omitted. Prince Hamlet would not have been so complex without this scene and so he would not be as interesting as he would be now. This is probably why Shakespeare's play still stands the test of time making him one of the most famous playwrights ever recorded in history. ...read more.