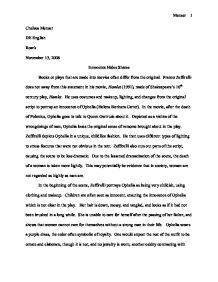 Chelsea Menser DE English Roark November 13, 2008 Innocence Hides Shame Books or plays that are made into movies often differ from the original. Franco Zeffirelli does not sway from this statement in his movie, Hamlet (1991), made of Shakespeare's 16th century play, Hamlet. He uses costumes and makeup, lighting, and changes from the original script to portray an innocence of Ophelia (Helena Bonham Carter). In the movie, after the death of Polonius, Ophelia goes to talk to Queen Gertrude about it. Depicted as a victim of the wrongdoings of men, Ophelia loses the original sense of remorse brought about in the play. Zeffirelli depicts Ophelia in a unique, childlike fashion. He then uses different types of lighting to stress features that were not obvious in the text. Zeffirelli also cuts out parts of the script, causing the scene to be less dramatic. Due to the lessened dramatization of the scene, the death of a woman is taken more lightly. ...read more.

Though the scene brings light to the pureness of Ophelia, she possesses contradicting attributes as well. She has dark features, including her hair and eyes. Other characters do not possess these qualities, perhaps showing that although she is seen with innocence, an impurity lies beneath that is not directly seen within the text. Zeffirelli also uses lighting to represent characters with greater meaning. The lighting of Ophelia changes during the scene, emphasizing features that are not as evident in the text. Upon her entrance to the castle, Ophelia has more light brought to her than the other characters. Light and dark are often used to give visual difference between good and bad, pure and impure, innocence and guilt. The characters then enter the room in which Ophelia sits on Gertrude's throne with a single bright light shining on her. She can be compared easily to an angel in heaven, the purest of all pure things, emphasizing her innocence yet again. ...read more.

The reader's view is changed drastically at this point, as all innocence is lost. As Zeffirelli did not use these lines, Ophelia retains her innocence. If the lines had been used all innocence would have been lost, just as in the play, because she was an unmarried woman. The viewing audience therefore has pity for Ophelia that, if the lines were included, would have been lost. The technical use of lighting, costuming, makeup, and script by Zeffirelli show that society holds greater standards for women than men. Shakespeare's society held the view that women must be perfect. In Shakespearean time, women were looked down upon for poor hygiene, appearance, or speech, as well as having s****l relations before marriage. Zeffirelli casts a fake innocence on Ophelia, providing reason for one to believe that women are taken advantage of often, though they are in fact feeble, powerless, and heavily dependent on strong men in their society. Zeffirelli causes Ophelia to obtain a false innocence in the film that is not achieved in Shakespeare's original play. ...read more.