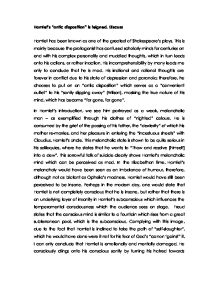 Hamlet's "antic disposition" is feigned. Discuss Hamlet has been known as one of the greatest of Shakespeare's plays. This is mainly because the protagonist has confused scholarly minds for centuries on end with his complex personality and muddled thoughts, which in turn leads onto his actions, or rather inaction. His incomprehensibility by many leads me only to conclude that he is mad. His irrational and rational thoughts are forever in conflict due to his state of depression and paranoia; therefore, he chooses to put on an "antic disposition" which serves as a "convenient outlet" to his "sanity slipping away" (Wilson), masking the true nature of his mind, which has become "far gone, far gone". In Hamlet's introduction, we see him portrayed as a weak, melancholic man - as exemplified through his clothes of "nighted" colours. He is consumed by the grief of the passing of his father, the "dexterity" of which his mother re-marries, and her pleasure in entering the "incestuous sheets" with Claudius, Hamlet's Uncle. This melancholic state is shown to be quite serious in his soliloquies, where he states that he wants to "Thaw and resolve [himself] into a dew". This sorrowful talk of suicide clearly shows Hamlet's melancholic mind which can be perceived as mad. In the Elizabethan time, Hamlet's melancholy would have been seen as an imbalance of humour, therefore, although not as blatant as Ophelia's madness, Hamlet would have still been perceived to be insane. ...read more.

It is clear that insanity had created his imbalanced mind, and the graveyard scene merely shows that shreds of his mind before his depression and insanity set in are still present. Another such case where Hamlet shows conscious insanity is in his talk with Polonius where he calls Polonius a "fishmonger" and answers his questions irrationally. Although he may mask it as attempting to fool Polonius and others by acting insane, Hamlet is too convincing. Hamlet has given too much away and shown his insanity. The foolish Polonius states that Hamlet's replies are "pregnant" with meaning, but Hamlet has merely succeeded in convincing Polonius with mere wit. The only thing Hamlet is "pregnant" with is his insanity which grows and shows itself in full bloom later in the play. Analysis of Hamlet's psyche leads quite nicely into his possible Oedipal complex. This is the theory which postulates that Hamlet represses his subconscious s****l desires for Gertrude and it is this subconscious s****l frustration which influences his conscious behaviour to become one of obsession and temperamental paranoia. Ernest Jones states that "Hamlet feels anguish caused by his father being replaced in his mother's affections" and that the affection he feels for his mother has underlying "erotic qualities". In regards to the replacement of his father, this is quite understandable, for change is hard. His father, Hamlet's idol (as clearly conveyed through his talks of him as a "Hyperion") ...read more.

Hamlet's atrocious actions refute his description as a "renaissance man" (Stoll) for a renaissance man has morals and humane ethics. Hamlet has nothing but obsession, persistence and an insane mind. Jones states that Hamlet's "soliloquies are dramatisations of a brilliant mind". This may well be true. Hamlet was indeed in possession of a brilliant mind, but brilliance and insanity are two very different things that can fit together in a mind to confuse numerous amounts of scholars throughout the ages. In the famous "to be or not to be" soliloquy Hamlet philosophises if there is a presence (God) "who would bear the whips and scorns of time". Essentially, he is stating if it would be better to leave the world of turmoil behind by means of suicide. His first soliloquy openly rejects suicide, however, now, he seriously questions if it is the right method to choose. He has lost faith in God and faith in people, for he distances himself from almost everyone in the play. His mind has deteriorated from moral sense and plunged deeper into insanity. It is almost humorous to hear critics like Hazlitt state that Hamlet was a "great moraliser". He moralises nothing. He has abandoned his morals. He is moral-less or they would have intervened in his horrid actions of murder and revenge. He subconsciously and maybe even consciously realised this and feigned an "antic disposition" in order to slowly allow himself to become more and more insane. His progressively violent actions throughout the play show that this is true. ...read more.