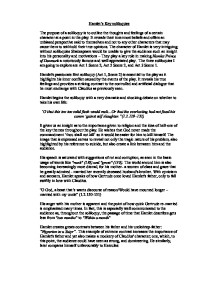 Hamlet's Key soliloquies The purpose of a soliloquy is to outline the thoughts and feelings of a certain character at a point in the play. It reveals their innermost beliefs and offers an unbiased perspective said to themselves and not to any other characters that may cause them to withhold their true opinions. The character of Hamlet is very intriguing; without soliloquies Shakespeare would be unable to give the audience such an insight into his personality and motivations - They play a key role in making Hamlet Prince of Denmark a notoriously famous and well appreciated play. The three soliloquies I am going to explore are Act 1 Scene 2, Act 2 Scene 2, and Act 3 Scene 1. Hamlet's passionate first soliloquy (Act 1, Scene 2) is essential to the play as it highlights his inner conflict caused by the events of the play. It reveals his true feelings and provides a striking contrast to the controlled and artificial dialogue that he must exchange with Claudius as previously seen. Hamlet begins the soliloquy with a very dramatic and shocking debate on whether to take his own life: 'O that this too too solid flesh would melt...Or that the everlasting had not fixed his canon 'gainst self slaughter."(1.2.129-132) It gives us an insight as to the importance given to religion and the idea of h**l-one of the key themes throughout the play. ...read more.

In a disjointed outpouring of disgust, anger, sorrow, and grief, Hamlet explains that, without exception, everything in his world is either useless or disgraceful. ******** In addition to revealing Hamlet's plot to catch the king in his guilt, Hamlet's second soliloquy (Act 2, Scene 2) uncovers the very essence of Hamlet's true conflict. For he is undeniably committed to seeking revenge for his father, yet he cannot act on behalf of his father due to his revulsion toward extracting that cold and calculating revenge. The key theme to the second soliloquy is of Hamlet procrastinating and failing to take revenge for his father's death. He is upset because he is unable to show the passion in real life that the player can show on stage. "This player here ...Could force his soul so to his own conceit...Tears in his eyes, distractions in's aspect" He can't believe that an actor can show anger and even cry for a fictitious event when he can't, despite all his reasons to show these emotions. Determined to convince himself to carry out the premeditated murder of his uncle, Hamlet works himself into a frenzy: "b****y, bawdy villain! /Remorseless, treacherous, lecherous, kindles villain! /Oh Vengeance! (2.2.531-532)" He hopes that his passions will halt his better judgement and he will then be able to charge forth and kill Claudius without hesitation. ...read more.

He knows that the answer would be undoubtedly "yes" if death were like a dreamless sleep. "But the dread of something after death, / the undiscovered country from whose born/ no traveller returns." (3.1.77-79) Hamlet faces the fear of what happens after death. Since Hamlet has already encountered his father's ghost, and thus proof of the afterlife, this line has raised much debate. Some theories debate that the line is a mistake, or that the entire soliloquy is in the wrong place, and should be before Hamlet has met the ghost. Others argue he is referring only to human beings returning in the flesh and not as mere shadows of their previous selves. The major question 'To be or not to be' is believed by some to be a question of whether Hamlet should take his own life. The argument put against this view is that Hamlet never specifically uses 'I', he is actually pondering the worth of human existence as a whole. Both alternatives would have been shocking to the deeply religious Elizabethan audience. Hamlets mood is much calmer, again he is procrastinating by waiting for the play to expose Claudius' guilt- Hamlet is the thinker, not the doer. It is perhaps the most disturbing form of melancholy Hamlet has displayed because he remains calm, and collected throughout. His thoughts on suicide are not over-dramatised as in previous soliloquies. The soliloquy as a whole then is an exercise in bitter irony. ...read more.