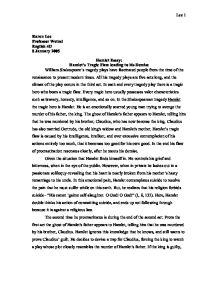 Karen Lee Professor Wetzel English 4U 8 January 2005 Hamlet Essay: Hamlet's Tragic Flaw leading to his Demise William Shakespeare's tragedy plays have fascinated people from the time of the renaissance to present modern times. All his tragedy plays are five acts long, and the climax of the play occurs in the third act. In each and every tragedy play there is a tragic hero who bears a tragic flaw. Every tragic hero usually possesses valor characteristics such as bravery, honesty, intelligence, and so on. In the Shakespearean tragedy Hamlet the tragic hero is Hamlet. He is an emotionally scarred young man trying to avenge the murder of his father, the king. The ghost of Hamlet's father appears to Hamlet, telling him that he was murdered by his brother, Claudius, who has now become the king. Claudius has also married Gertrude, the old king's widow and Hamlet's mother. Hamlet's tragic flaw is caused by his intelligence, intellect, and over excessive contemplation of his actions entirely too much, that it becomes too good for his own good. In the end his flaw of procrastination resonates clearly, after he meets his demise. Given the situation that Hamlet finds himself in. He controls his grief and bitterness, when in the eye of the public. ...read more.

After the play, Hamlet uses to gather evidence of Claudius' guilt, Hamlet is triumphant - his plot has worked, and Claudius convicts himself, by stopping the play - during the second scene when the murderer has poisoned the victim . Claudius' secret is known -'O, my offence is rank (rotten), it smells to heaven;' (III,iii, 36)- and he reveals this to the audience and recognizes the rightness of Hamlet's cause. He is in the church praying and asks God to 'Forgive me my foul murder." (III,iii,52) Hamlet is right there in the church and has the perfect opportunity to kill Claudius, but he remains puzzled, undecided, and sceptical, dallies with his purposes, till the occasion is lost, and finds out some pretence to decline into indolence and thoughtfulness again. Hamlet passes up this opportunity to kill Claudius, because he begins to argue with himself that this would not bet true revenge for his father's murder simply because the ghost has told him of its suffering in Purgatory, but Claudius would avoid these if he were to die as he is kneeling, when he is in a state of grace. So Hamlet waits until Claudius is engaged in some act "That has no relish of salvation in't,' (III, iii, 92) ...read more.

When Hamlet returns from England, Laertes and Hamlet duel each other. The rapier that Laertes holds has a poisonous tip that accidentally gets in the hands of Hamlet. There is also, which the Queen drinks. Laertes cuts Hamlet with the poisonous rapier, and Hamlet cuts Laertes with that same rapier. Suddenly the Queen falls, and dies. Laertes confesses the poisoning of the weapon and the wine, blaming it on the king - "The King - the King's to blame." (V, ii, 356). Hamlet, seeing concrete evidence, now goes after his uncle and forces him to drink the poisonous wine. In the end, Hamlet, Laertes, Claudius, Gertrude, Polonius, Ophelia, Rosencrantz, and Guildenstern are dead. If Hamlet could have acted decisively, seven innocent people would survive the play, and one guilty man would have gone punished. At a broader level, he thinks when he should act, and acts when he should think. It is clear that Hamlets inability to act caused by over thinking the situation, and being too smart for his own good, aids in his habit of procrastination. His procrastination brought unnecessary blood shed, and death to innocent characters. By the time he realized that he should have acted on his purpose sooner than later (III,iii), it was already too late to save himself from the inevitable death he was bound to face in the end. ...read more.