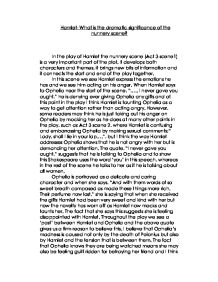 Hamlet- What is the dramatic significance of the nunnery scene?

Hamlet- What is the dramatic significance of the nunnery scene? In the play of Hamlet the nunnery scene (Act 3 scene1) is a very important part of the plot. It develops both characters and themes, it brings new bits of information and it connects the start and end of the play together. In this scene we see Hamlet express the emotions he has and we see him acting on his anger. When Hamlet says to Ophelia near the start of the scene, "..... I never gave you aught," he is denying ever giving Ophelia any gifts and at this point in the play I think Hamlet is taunting Ophelia as a way to get attention rather than acting angry. However, some readers may think he is just taking out his anger on Ophelia by mocking her as he does at many other points in the play, such as Act 3 scene 2, where Hamlet is confusing and embarrassing Ophelia by making sexual comments:" Lady, shall I lie in your lap....", but I think the way Hamlet addresses Ophelia shows that he is not angry with her but is demanding her attention. The quote, "I never gave you aught," suggests that he is talking to Ophelia and to show this Shakespeare uses the word 'you' in this speech, whereas in the rest of the scene he talks to her as if he is talking about all women. ...read more.

The fact that Hamlet's abuse increases after this suggests that Hamlet knows that Polonius is spying on him and therefore he knows Ophelia is lying and betraying him, but there is no definite evidence that Hamlet knows he is being watched and because of this the reader wonders whether Hamlet is acting his madness or really is insane. In this quote the language which Shakespeare uses tell us that Hamlet is not only directing his anger at Ophelia but at all women. The words, " I have heard...." Suggests to us that Hamlet has seen many women "mask" themselves, though the words, "God has given you one face and you make yourselves another." have more than one meaning. One is that Hamlet is talking about make-up and the way women hide their blemishes under the make-up they wear, but I think he is talking about the way women act depending on whom they are with. Either opinion could be used in this scene as both make sense. Near the end of this scene Hamlet says, " I say we have no more marriages," and I think this is one of the most important lines in this scene. The fact that Hamlet has brought up marriages suggests that his real problem lies with his mother's marriage to his uncle. ...read more.

Throughout the play hamlet talks about his mother as if they had a close relationship yet he clearly displays his disapproval of what he calls their incestuous marriage. The fact that he does this suggests that he feels betrayed and let down by his mother and the fact that she has moved on from his beloved father quite quickly obviously upsets him. When Hamlet says to Ophelia, " Ha, ha, are you honest?", Hamlet may be suggesting that Ophelia has something to do with Polonius's plot and if the reader interpret ed the above quote like that then again it shows Hamlet does not fully trust Ophelia and thinks she may have betrayed him, Although the quote, "Ha, ha, are you honest?", may be Hamlet mocking Ophelia by asking her if she is still a virgin. I think the dramatic significance of this scene is that it is a scene that connects everything in the play together, it give everything a meaning and reason and without it the play would not make sense. It shows that Hamlet is not coping with the marriage of his mother and uncle and this is why later in the play he seeks revenge. It also shows that he is feeling very betrayed and alone and so redirects his anger for his mother at Ophelia, and because of this and the fact that Ophelia knows they are being watched she feels guilt-ridden and so is pushed into madness. ?? ?? ?? ?? ...read more.