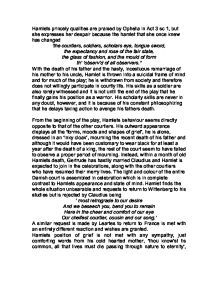 Hamlets princely qualities are praised by Ophelia in Act 3 sc 1, but she expresses her despair because the hamlet that she once knew has changed 'the courtiers, soldiers, scholars eye, tongue sword, the expectancy and rose of the fair state, the glass of fashion, and the mould of form th' 'observ'd of all observers." With the death of his father and the hasty, incestuous remarriage of his mother to his uncle, Hamlet is thrown into a suicidal frame of mind and for much of the play; he is withdrawn from society and therefore does not willingly participate in courtly life. His skills as a soldier are also rarely witnessed and it is not until the end of the play that he finally gains his position as a warrior. His scholarly skills are never in any doubt, however, and it is because of his constant philosophizing that he delays taking action to avenge his fathers death. From the beginning of the play, Hamlets behaviour seems directly opposite to that of the other courtiers. His outward appearance displays all the 'forms, moods and shapes of grief', he is alone, dressed in an 'inky cloak', mourning the recent death of his father and although it would have been customary to wear black for at least a year after the death of a king, the rest of the court seem to have failed to observe a proper period of mourning. ...read more.

Despite the fact that he knows it is duty to correct the wrong that has fallen on his country, Hamlet, like the rest of the cortiers is obedient to the king and respects both his mothers' wishes. Hamlets skills as a soldier are rarely witnessed. Following the death of his father, he is too reflective, analytical and moral. Leartes and Fortinbras provide a contrast with Hamlets character as they are shown to be more heroic. At the beginning of the play (act 1 sc1), the audience learn that Fortinbras, the son of the king of Norway who was killed by Hamlets father, has assembled a group of lawless soldiers and he hopes to recover land lost by his father , to Denmark when he was defeated. After a complaint by Claudius, Fortinbras is sent to advance on Poland and it is here that Hamlet comes across one of Fortinbras's captians. He is humiliated by his lack of action especially when he learns that Fortinbras had successfully persuaded his army of 2,000 men to fight over a worthless piece of land as the captain explains to Hamlet, ' we go to gain a little patch of ground, that hath in it no profit but the name'. This encounter finally motivates Hamlet into action as he recognizes his father is dead and his mother 'stained'. ...read more.

His plan to stage a play within a play to 'catch the conscience of the king', shows Hamlets knowledge of literature. He greets the first player as an 'old friend', and he offers advice to the players on the importance of a naturalistic acting style, 'suit the action to the word, the word to the action, with this special Observance, that you o'erstep not the modesty of nature' His familiarity with revenge plays is demonstrated by his ability to remorse quotes from his favourite plays. He recites, Aeneas speech to Dido, 'the rugged Pyrrhus, did the night resemble' In his intellectual way, Hamlet rationalizes life, and accepts nothing without carefully analyzing it first but, this constant procrastinating results in Hamlet thinking to much about what action he should be taking and at the same time, failing to achieve any results. In the play of Hamlet, Ophelia explains Hamlet to be a 'courtier, soldier, scholar'. Hamlets intellect generally makes him a better a better scholar, than a soldier or courtier. Although he is obedient to the king. The way Hamlet manages his soldierly skills are irresponsible and ruthless, which is evident in the way he kills Polonius mistaking him for Claudius. As hamlet is well educated he is able to fool everyone into thinking he is mad, he hosts the play with in a play to catch out Claudius and is generally very knowledgeable throughout the play. ...read more.