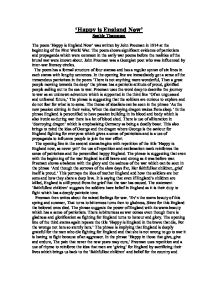 'Happy is England Now' Sophie Thompson The poem 'Happy is England Now' was written by John Freeman in 1914 at the beginning of the First World War. The poem shows significant evidence of patriotism and propaganda which were common in the early war poems before the realities of the brutal war were known about. John Freeman was a Georgian poet who was influenced by inter-war literacy circles. The poem has a formal structure of four stanzas and has a regular syntax of six lines in each stanza with lengthy sentences. In the opening line we immediately get a sense of the tremendous patriotism in the poem 'There is not anything more wonderful, Than a great people moving towards the deep' the phrase has a patriotic attitude of proud, glorified people sailing out to the sea to war. Freeman uses the word deep to describe the journey to war as an unknown adventure which is supported in the third line 'Of an unguessed and unfeared future,' The phrase is suggesting that the soldiers are curious to explore and do not fear for what is to some. ...read more.

The statement 'faithfullest children' suggests the soldiers have belief in England as it is their duty to fight which has a deeply patriotic tone. Freeman then writes about the mixed feelings for war. 'Ev'n the warm beauty of this spring and summer, That turns to bitterness turns then to gladness, Since for this England the beloved ones died. The phrase suggests the power of England with its warm beauty which has a sense of patriotism. There is bitterness as war comes even though there is gladness and glorification as fighting for England turns to honour and glory. The opening line of the third stanza again repeats the title 'Happy is England in the brave that die, For the wrongs not hers so sternly hers.' The phrase is implying that England is deeply grateful for the men who die fighting for England and that she is not wrong to go to war it is having to fight because of an aggressor. ...read more.

In the ultimate phrase Freeman uses idealism that England is now purer as the men have sacrificed their lives to save the beauty and the goodness of there cherished home 'There's not a nobleness of heart, hand, brain, But Shines the purer; happiest is England now, In those that fight, and watch with pride and tears.' Freeman is implying that no matter what people were like in the past England will be a better, purer place. The use of the word 'tears' is implying the recognition that the war has caused sorrow however it is worthwhile to protect the beauty of our mother England. The poem 'Happy is England' has a tremendous patriotic sense behind the fear of the unknown future which drives it on. Freeman writes the poem which such passion and the theme of idealism runs throughout the poem. I enjoyed the poem as it had a balance of the positive and negative aspects of the war, unlike other early war poems. It uses a symbolism of the natural England which portrays the idea of home of the soldiers and expresses the beauty and how we value our loving England. ...read more.

This is a competent review of the poem, perhaps concentrating too much on textual analysis. This aspect is very thorough, however, and suitable quotations are used to illustrate the points made. Structure is quickly dismissed in paragraph 2, yet comment could have included the use of a regular metre and the purpose that this serves. More could also have been said about poetic devices, such as the personification of "England". What is the purpose of this? What would it have meant to the readers at the time?

Structure is good. Sentences are mostly well-controlled, though there is some ponderous introduction of quotations which could have been more effectively incorporated in the flow of the writing. The final paragraph could do more to sum up the overall argument of the essay.