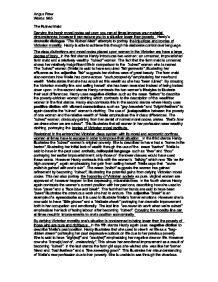 Hardys dramatic dialogue The Ruined Maid attempts to portray the injustices and ironies of Victorian morality. Hardy is able to achieve this through his elaborate control over language.

The Ruined Maid Denying the harsh moral codes set upon you can at times improve your material circumstances; however it can reduce you to a situation lower than poverty. Hardy's dramatic dialogue "The Ruined Maid" attempts to portray the injustices and ironies of Victorian morality. Hardy is able to achieve this through his elaborate control over language. The class distinctions and moral codes placed upon women in the Victorian era have a large degree of irony. In the first stanza Hardy introduces two women: an unnamed, impoverished farm maid and a relatively wealthy "ruined" woman. The fact that the farm maid is unnamed shows her relatively insignificant life in comparison to the "ruined" woman who is named. The "ruined" woman ('Melia) is said to have acquired "fair garments", illustrating her affluence as the adjective "fair" suggests her clothes were of great beauty. The farm maid also wonders how 'Melia has come across "such prosperi-ty" emphasising her newfound wealth. 'Melia states that she has acquired this wealth as she has "been ruined". By crossing the Victorian morality line and selling herself she has been rewarded instead of being looked down upon. ...read more.

'Melia is said to have in the past used archaic, colloquial language such as "thee" and "thou" portraying her earlier impoverishment; only those of the lower classes would have used these words. However Hardy contrasts this with the woman's "talking" which now "fits 'ee for high company", again emphasising her gain from selling herself. 'Melia says that "some polish is gained with one's ruin". The noun "polish" suggests the woman has gained refinement by becoming "ruined", illustrating the potential gains from defying Victorian moral codes. This can also portray the hypocrisy of Victorian society as pure, virginal women are approved of; however happen to live depressing, miserable lives. In the fourth stanza Hardy again contrasts the woman's current position with her past one, describing how she used to have "paws" and a "face blue and bleak". The fact that her hands are said to have been "paws" illustrates the strenuous work she had to endure. The adjective "bleak" is an example of a synecdoche as it is used to illustrate 'Meila's former emotions. However she is now said to have "little gloves" and a "delicate cheek" portraying her dramatic improvement both in her occupation and emotionally. ...read more.

The adjective "raw" again emphasises the girl's righteousness and innocence contrasted to the other woman's "ruined" morality. The two women are completely different due to the chasmic nature of the Victorian class distinctions and 'Melia's decision to sell herself. 'Melia's also denies the farm maid of her dreams stating that she "cannot quite expect that". Although she wishes she could become wealthy she can't escape the class which she was born into. 'Melia says that "you ain't ruined" showing that to become rich after being born into the lower classes you must become "ruined". However this could also be seen as a warning to the other woman to hold on to her maidenly modesty due to its huge worth in Victorian society. Furthermore Hardy uses the colloquial expression "ain't" to show the reader that the "ruined" woman hasn't escaped her poor origins. Women of the Victorian times held a very insecure position in society; one which could change dramatically just by defying ironic moral codes. In "The Ruined Maid" Hardy attempts to show the ironies and injustices place upon women in the Victorian era. He shows that although one may improve their economic situation by defying the moral codes of their society they are condemned to a fate worse than poverty. ?? ?? ?? ?? Angus Frew Words: 985 ...read more.