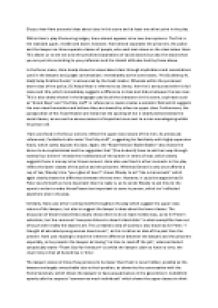 ﻿Discuss how Hare presents ideas about class in this scene and at least one other point in the play. Within Hare?s play Murmuring Judges, there almost appears to be two class systems. The first is the standard upper, middle and lower, however, Hare almost separates the prisoners, the police and the lawyers as three separate classes of people, who each look down on the class below them. This allows us to see not only the perceived separations of social classes but also the classes that you are put into according to you profession and the classist attitudes held by those above. In the focus scene, Hare clearly shows his views about class through implications and connotations used in the lawyers and judges conversations. Immediately as the scene starts, ?His Excellency AL Hadji Sulay Ibrahim Dunko? is announced by the toast master. Whereas within the perceived lower class of the police, DC Abdul Khan is referred to as Jimmy, here he is announced with his full name and title, which immediately suggests a difference in class and status between the two men. ...read more.

This unrealistic idea of society is also shown by Sir Peter, ?I thought all educated young women loved music?, as this is rather an idea of the past then the present. Hare uses reading to show the inherent difference between the lawyers and the prisoners especially, as he presents the lawyers as having ?no time to read off the job?, whereas Gerard sarcastically states ?Thank God for literature? as whilst the lawyers claim to have no time, the cruel irony is that all Gerard has is ?time?. The lawyers views on those they perceive to be lower than them is never hidden, possibly as the lawyers are largely untouchable due to their position, as shown by the conversation with the Home Secretary, which shows the lawyers to have acquaintances in the government. Cuddeford openly calls the suspects ?common-as-much individuals? which shows the upper classes to think themselves much better than everyone else. This is further shown by ?[the prisons] may be called failings of society? which are truly not my concern? show disinterest in the justice of those beneath them, again shown by Sir Peter?s unwillingness to do criminal law as ?it involves real people?. ...read more.

It also shows the extent to which the lawyers are upper class, as the blasé attitude of “give or take a few thousand” shows how small an amount of money this is to them, which would be huge to any other characters in the play. Cuddeford is shown to be clearly aware of this, “play down the million”, which suggests a level of guilt at using the money for this, especially within their profession. In conclusion, Hare uses juxtaposition throughout Murmuring Judges to show the seemingly inherent differences in class between the lawyers and the prisoners in particular. Whilst the prisoners are forced to “slop out” and “throw s**t packages”, the lawyers are often presented in luxurious settings, “laid out magnificently four different wine glasses”. Hare also presents ideas of class mainly from the perspective of the lawyers who seem themselves as more important than they perhaps are, and certainly better than the “common-as-muck” ordinaries. Overall, I think the ideas of class in the play are nicely represented in the line “we were going to abolish this as outdated”, but in the end didn’t, which for me shows the lawyers understanding that the system is incapable or unwilling to work to the best of its ability, but simply would rather not out of tradition. ...read more.