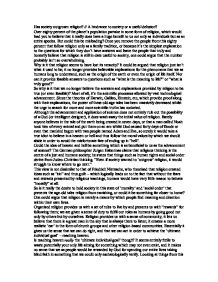 Has society outgrown religion? // A hindrance to society or a useful delusion?

Has society outgrown religion? // A hindrance to society or a useful delusion? Over eighty percent of the planet's population partake in some form of religion, which would lead you to believe that it really does have a huge benefit to us not only as individuals but as an entire species. But could this be misleading? Once you remove the people from this eighty percent that follow religion only as a family tradition, or because it's the simplest explanation to the questions for which they don't have answers and leave the people that truly and honestly believe that religion is still in-date useful to society, one could argue that the number probably isn't so overwhelming. Why is it that religion seems to have lost its veracity? It could be argued that religion just isn't what it used to be; it no longer provides believable explanations for the phenomena that we as humans long to understand, such as the origin of the earth or even the origin of life itself. ...read more.

"Even if society wanted to 'outgrow' religion, it would struggle to know where to go next." This view is not dissimilar to that of Friedrich Nietzsche, who theorised that religion created ideas such as "sin" and thus guilt - which logically leads on to the fact that without the fears and rewards presented by religious teachings, humans would have very little reason to behave "morally" at all. So is it really the desire to hold society in this state of 'morality' and 'social order' that prevents the age-old tales religion from vanishing, or could it be something far closer to home? One could argue that religion is merely a means by which people find meaning and direction within their own lives. Organised religion provides us with a set of rules to live by and presents us with "rewards" for following them; we are given a sense of duty to fulfil our roles as humans by going good not only by others but by ourselves. ...read more.

It is also in this case that the promise of a heaven or h**l for following the rules of religion is something which doesn't benefit society, but instead leads individuals to believe that it is okay to commit homicide or suicide to fight for their cause, as God will still 'love' them. Essentially, religion is both a hindrance to us and a useful delusion. If only we could learn to take the "good bits" from religion such as the strong moral values, social order and general good will and learn to let go of some of the values that we really are beginning to outgrow - such as the things that science is now taking over - then religion would be of benefit to us all. Such an approach to religion could even take away the strength behind it that not only causes conflict and bloodshed, but causes us to potentially waste our lives by aiming for an afterlife that we cannot even guarantee exists. Either way, it seems that religion (and the values held within it) is going to be here for a long while yet. ...read more.