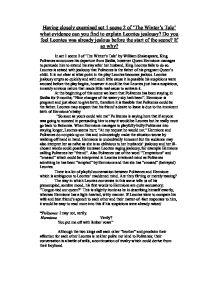 Having closely examined act 1 scene 2 of 'The Winter's Tale' what evidence can you find to explain Leontes jealousy? Do you feel Leontes was already jealous before the start of the scene? If so why?

Having closely examined act 1 scene 2 of 'The Winter's Tale' what evidence can you find to explain Leontes jealousy? Do you feel Leontes was already jealous before the start of the scene? If so why? In act 1 scene 2 of 'The Winter's Tale' by William Shakespeare, King Polixenes announces his departure from Sicilia, however Queen Hermione manages to persuade him to extend his stay after her husband, King Leontes fails to do so. Leontes is seized with jealousy that Polixenes is the father of his pregnant Queen's child. It is not clear at what point in the play Leontes becomes jealous. Leontes jealousy erupts so quickly and with such little cause it is possible his suspicions were aroused before the play begins, however it could be that Leontes just has a suspicious, innately envious nature that needs little real cause to activate it. At the beginning of this scene we learn that Polixenes has been staying in Sicilia for 9 months; "Nine changes of the watery sky hath been". ...read more.

Also Polixenes use of the word "Temptations" and "crossed" which could be interpreted in Leontes irrational mind as Polixenes admitting he has been "tempted" by Hermione and that she has "crossed" (betrayed) Leontes. There is a lot of playful conversation between Polixenes and Hermione which is ambiguous to Leontes' maddened mind. Are they flirting or merely teasing? The way in which Leontes converses in this scene tells us of his preoccupied, sombre mood, his first words to Hermione are quite accusatory; "Tongue-tied our queen?" This is slightly ironic as he is describing himself exactly, whereas Hermione has a light-hearted, witty manner. If Leontes were to compare his wife and best friend's speech to each other and their matter-of -fact responses to him, it would be easy to read more into this if his suspicions were already raised: "Polixenes I may not, verily. Hermione Verily? You put me off with limber vows" Although the two kings call each other "brother" and proclaim their affection for each other Leontes is neither polite nor kind to Polixenes; their conversation is a battle of wills, a continuation of rivalry which could derive from their boyhood. ...read more.

Leontes list goes on and he has clearly been watching and agonizing over his suspicions for a while and is now convinced they are having a full blown affair. The extent of his madness is shown when Leontes orders Camillo to poison Polixenes. I think the only evidence that Leontes was jealous before the start of the scene is how rapidly and suddenly he becomes this wild, jealous creature with so little warning and no solid evidence. However, different audiences will interpret Leontes envious rage in different ways according to the way it is construed by the actors. One adaptation could have Leontes plainly scrutinizing Hermione and Polixenes' every move right from the beginning of the play, whereas another interpretation could have Leontes showing little reaction until he suddenly boils over in act 1 scene 2. I can find little evidence in the play that would convince a rational person that Polixenes and Hermione are having an affair; however in Leontes obviously irrational mind any of the points I have mentioned above could arouse his suspicions. ...read more.