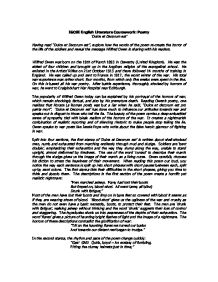 Having read &amp;#147;Dulce et Decorum est&amp;#148;, explore how the words of the poem re-create the horror of the life of the soldiers and reveal the message Wilfred Owen is sharing with his readers.

IGCSE English Literature Coursework: Poetry 'Dulce et Decorum est' Having read "Dulce et Decorum est", explore how the words of the poem re-create the horror of the life of the soldiers and reveal the message Wilfred Owen is sharing with his readers. Wilfred Owen was born on the 18th of March 1893 in Oswestry (United Kingdom). He was the eldest of four children and brought up in the Anglican religion of the evangelical school. He enlisted in the Artists' Rifles on 21st October 1915 and there followed 14 months of training in England. He was called up and sent to France in 1917, the worst winter of the war. His total war experience was rather short: four months, from which only five weeks were spent in the line. On this is based all his war poetry. After battle experience, thoroughly shocked by horrors of war, he went to Craiglockhart War Hospital near Edinburgh. The popularity of Wilfred Owen today can be explained by his portrayal of the horrors of war, which remain shockingly factual, and also by his premature death. Reading Owen's poetry, one realizes that Horace (a Roman poet) ...read more.

The men are 'drunk with fatigue', walking asleep without thinking and the word 'drunk' suggests their loss of control and staggering. The hyperboles shock us into awareness of the depths of their exhaustion. The word 'flares' gives a picture of haunting bright flashes of light and the image of a nightmare. The horrors of these descriptions contradict the glorification of war: "Till on the haunting flares we turned our backs And towards our distant rest began to trudge." In the second stanza, the rhythm and pace of the poem change quickly: "Gas! GAS! Quick, boys! - An ecstasy of fumbling, Fitting the clumsy helmets just in time;" In the phrase 'Gas! Gas! Quick, boys!' the use of direct speech and the monosyllables suggest the strong pulse of the action. The dash linking up the two short phrases creates a pause, signifying the soldiers frantically getting their gasmasks on. 'Clumsy helmets' is a transferred epithet as the helmets are not really 'clumsy' but the soldiers try to fit the heavy helmets clumsily amidst the chaos. The word 'ecstasy' describes their sudden madness and desperation as they fight for their lives and prepare for the gas attack. ...read more.

of sin;" The word 'writhing' gives a vivid image of pain and discomfort as we get the horrible image of the man's face twisting violently and the 'white eyes' also create an image of horror and violence. Earlier in this stanza, the words 'smothering' and 'flung' also add to the image of violence and hostility. 'Flung' also suggests a lack of care as well as aggression in the action. The climax of the poem comes in the last two lines: the 'old lie', a quote from Horace: "The old Lie: Dulce et decorum est Pro patria mori." Horace's famous ode translates as 'Sweet and fitting it is to die for one's country.' Wilfred Owen speaks out to the poets in a scolding tone, sympathetic to the innocent young men misled by the lies and sacrificed in war. Owen addresses the young lads eager for war as 'children' - easily deceived by the cleverly disguised old lie. The word 'children' suggests tenderness and sympathy for the young, na�ve men who are misled. In the last stanza Owen speaks with tenderness and sympathy for the men as well as accusation to the people spreading tales of false glory. Anger overtakes bitterness for Owen has seen for himself the brutality of war. ...read more.