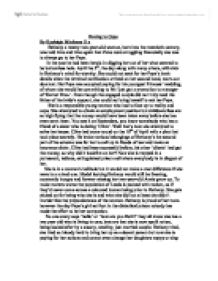 Having to Cope By Kayleigh Minihane 11x Bethany a twenty two-year-old woman, born into the twentieth century, was told time and time again that if she were struggling financially she was to always go to her Papa. In the past he had been heroic in digging her out of her what seemed to be bottomless hole. April the 5th, the day along with many others, will stick in Bethany's mind for eternity. She could not seek for her Papa's bank details when the terminal notification arrived on her second hand, worn-out doormat. Her Papa was occupied paying for his youngest Princess' wedding, of whom she would be committing to Mr.'just got a promotion to manager of Warner Bros.'. Even though the engaged couple did not truly need the father of the bride's support, she could not bring herself to ask her Papa. She is a responsible young woman who had to face up to reality and cope. ...read more.

No one every says 'hello' or 'how are you Beth?' they all know she has a two year old who is living in care, bets are that she is now spoilt rotten, being looked after by a snooty, wealthy, just married couple. Bethany tried, she tried so b****y hard to bring her up as a decent person but now she is paying for her actions and cannot even change her daughters nappy or sing her to sleep. The pain, the anger, the suicidal moments she would not wish on her worst enemy. Being emotionally deserted and knowing that she let her dear Papa down, in numerous ways, in that now he would not even contemplate visiting her or bring himself to narrate what happened to his eldest 'Princess' if that's what she is anymore. Papa told his friends that Bethany had died, he lied to his comrades telling them that his own daughter had passed away after being knocked down by a drunken driver. ...read more.

Evidently they had found out about the absent knife. Bethany could see the sweat appearing on Kelly's brow. There was nowhere to hide the knife as they were in the center of the kitchen, away from any location of concealment. The wardens moved at a leisurely pace down the procedure towards Kelly. As they began searching the girl next to her, Kelly gulped the kind of gulp you do when you know you are in solemn trouble. If caught, with her previous record, she could look forward to months in solitary. As they began the search Kelly shivered and then to her amazement they finished with her and moved on. She put her hand to her pocket but the knife was gone. Just then she heard the warden cry out and saw them march Bethany away. Instantly she realized what had occurred. Bethany turned to Kelly and winked, Kelly blushing with embarrassment winked back and mouthed a silent thank you. Bethany had scooped to their level but for a reason, to belong. To make her five years, three months and twelve days left, until she was free, bearable. ...read more.