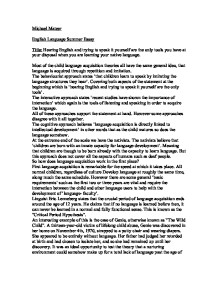 Hearing English and trying to speak it yourself are the only tools you have at your disposal when you are learning your native language.

Michael Mateer English Language Summer Essay Title: Hearing English and trying to speak it yourself are the only tools you have at your disposal when you are learning your native language. Most of the child language acquisition theories all have the same general idea, that language is acquired through repetition and imitation. The behaviourist approach states 'that children learn to speak by imitating the language structures they hear'. Covering both aspects of the statement at the beginning which is 'hearing English and trying to speak it yourself are the only tools'. The interactive approach states 'recent studies have shown the importance of interaction' which again is the tools of listening and speaking in order to acquire the language. All of these approaches support the statement at hand. However some approaches disagree with it all together. The cognitive approach believes 'language acquisition is directly linked to intellectual development' in other words that as the child matures so does the language somehow. At the extreme end of the scale we have the nativists. ...read more.

Once the child has began its basics of language acquisition it then requires a sufficient and constant input from other more advanced language users (Adults) in order to grasp and work out the regularities of that language. There are also Pre-language stages. These pre-linguistic sounds which are made in the early stages in the Childs language acquisition are simply called 'cooing' and 'babbling'. By roughly 4 to 6 months of age babies start to make many more sounds. Before speaking words, babies go through a period of babbling, in which they are practicing the sounds, intonations and rhythms of language. They learn to replicate sounds they hear and how moving their tongue and lips change the sounds they are making. They learn to adjust their voice, to yell and whisper. They start to babble in reaction to stimuli, and eventually use it to manipulate others by expressing needs and wants. By 9-12 months the child's babbling becomes more harmonious. Intonation starts to sound more like adult patterns. At first the sounds will be mainly drawn out vowel sounds. ...read more.

Of course they may not sound exactly like you would expect. "Book" may sound like "boo." It is common at this early stage to leave off consonants or consonant clusters from the beginning or end of a word. Sometimes a single word may represent an entire thought. 'Boo' may mean 'read me a book.' This is called a holophrase. If a baby wants a bottle and is just beginning to learn to use language to manipulate, he may point to his bottle, say (or scream) 'ba' or 'baba,' which obviously means, 'give me my bottle, now!' Of course this becomes problematic when a child yells 'BA!' and the parent do not know whether he wants a bottle or a ball or a book, or if he just feels like yelling. So in conclusion, I believe that the opening statement 'Hearing English and trying to speak it yourself are the only tools you have at your disposal when you are learning your native language.' Is a true statement. This is because of all of the theories and known facts about child language acquisition all say basically that hearing and speaking English is all that a child will use in order to acquire that language. ...read more.