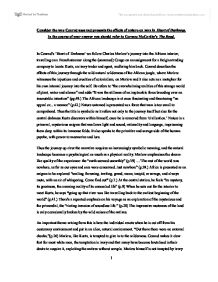 Consider the way Conrad uses and presents the effects of nature on man in Heart of Darkness. In the course of your answer you should refer to Cormac McCarthy's The Road. In Conrad's 'Heart of Darkness' we follow Charles Marlow's journey into the African interior, travelling on a French steamer along the (unnamed) Congo on an assignment for a Belgian trading company to locate Kurtz, an ivory trader and agent, and bring him back. Conrad describes the effects of this journey through the wild natural wilderness of the African jungle, where Marlow witnesses the injustices and cruelties of colonialism, on Marlow and it also acts as a metaphor for his own internal journey into the self. He refers to "the overwhelming realities of this strange world of plant, water and silence" and adds "It was the stillness of an implacable force brooding over an inscrutable intention" (pg.49.) The African landscape is at once fascinating and threatening "an appeal or... a menace" (p.42.) Nature untamed is presented as a force that man is too small to comprehend. Thus the title is symbolic as it refers not only to the journey itself but also for the central darkness Kurtz discovers within himself, once he is removed from 'civilisation.' ...read more.

When Marlow eventually finds Kurtz he is deeply shaken by what he sees and hears and he tries to "break the spell," but it is too late and Kurtz dies. His last words, "The horror! The horror!" (p 86) have been widely interpreted, but seem to suggest to Marlow at least, "a judgment upon the adventures of his soul on earth" in other words a final awareness of what he is. Marlow also claims that "it has candour, it has conviction - it had the appalling face of a glimpsed truth." When Marlow himself returns from the Congo he comments, 'it was my imagination that wanted soothing,' (p 88), acknowledging that his own imaginative power and the capacity for moral discrimination that influences it had also been put to the test and that it had been a struggle not to succumb like Kurtz. Marlow suggest that it is not the white man's conscience or innate superiority that keeps him on the straight path but his fear of the policeman and of public opinion. It brings to mind Tennyson's description of 'Nature, red in tooth and claw' - and underlines the Darwinian view that while civilisation has socialised man and given him a framework of morality, underneath that he ...read more.

Mankind has come full circle, reduced to savagery and barbarism and the strong literally eat the weak (groups of cannibals roam the countryside looking for human prey.) Both novels explore in different ways what it means to be human when the trappings of civilisation are taken away and although no glib answers are provided by either, both indicate that, although difficult, it is possible to keep a sense of morality. So what seems to save Marlow is his belief in the dignity of work, which helps him resist the appeal of the wilderness: "I like what it is to work - the chance to find yourself. Your own reality." (p 44) For the father it is love. For the love of his son he tries his utmost to keep hope alive with the prospect of a better life once they reach the coast, and it is what stops him from succumbing to savagery because he cannot bear for his son's simple belief that they are "the good guys" to be shattered. Yet both these novels never let us forget that mankind is ultimately a part of nature and utterly dependent on it, and that alongside our rational, 'civilised' self, there is a much baser, instinctual side to our nature which can be repressed but never destroyed. ...read more.