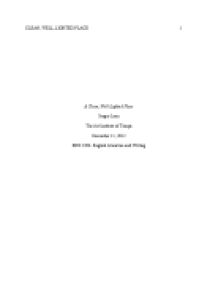 ï»¿CLEAN, WELL-LIGHTED PLACE 1 A Clean, Well-Lighted Place Sergio Leon The Art Institute of Tampa December 11, 2012 ENG 2203- English Literature and Writing ________________ A CLEAN, WELL-LIGHTED PLACE 2 In Hemingway’s A Clean, Well Lighted Place, the interaction between the older waiter and the younger waiter proves that with age and life experience, people have a greater understanding of others. In A Clean, Well Lighted Place, symbolism and sympathy play a role in helping understand the characters. I was drawn to this work because of the connection between the older waiter and the old man. This is evident in the dialogue between the waiters, the treatment of the old man by the waiters, and the older waiter’s thoughts and actions after the old man leaves the café. The story takes place in a café in Spain, possible in the 1930’s. This story was published in 1933 and I believe that the author wrote it with his present time in mind. ...read more.

The old waiter and the old man at the café had something in common. They were lonely and they both attempted to pass time and avoid loneliness by staying in public. The last thing the old waiter does to rationalize his being out so late is that he has insomnia. He makes himself feel better by saying that many people have insomnia. Hemingway’s A Clean, Well-Lighted Place illustrates how older people, with more life experience to draw from, are better at giving others a “pass” in life because at one time or another they have experienced the very same emotion that another is feeling in the present. This also shows how younger people, with a lack of life experience, are primarily thinking of themselves. They don’t quite see the “big picture” until later on in life. This story also taught me to enjoy life now while I am young, healthy, and surrounded by friends, family, and happiness. This may make it easier to remain happy in my older years if I truly relished the good in my life. ...read more.