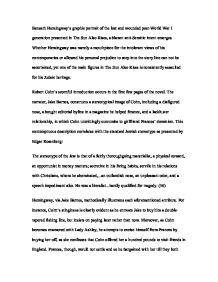 Hemingway's graphic portrait of the lost and wounded post-World War I generation presented in The Sun Also Rises.

Beneath Hemingway's graphic portrait of the lost and wounded post-World War I generation presented in The Sun Also Rises, a blatant anti-Semitic intent emerges. Whether Hemingway was merely a mouthpiece for the intolerant views of his contemporaries or allowed his personal prejudice to seep into the story line can not be ascertained, yet one of the main figures in The Sun Also Rises is consistently assaulted for his Judaic heritage. Robert Cohn's scornful introduction occurs in the first few pages of the novel. The narrator, Jake Barnes, constructs a stereotypical image of Cohn, including a disfigured nose, a bought editorial byline in a magazine he helped finance, and a lackluster relationship, in which Cohn unwittingly succumbs to girlfriend Frances' dominion. This contemptuous description correlates with the standard Jewish stereotype as presented by Edgar Rosenberg: The stereotype of the Jew is that of a fairly thoroughgoing materialist, a physical coward, an opportunist in money matters; secretive in his living habits, servile in his relations with Christians, whom he abominated,...an outlandish nose, an unpleasant odor, and a speech impediment also. ...read more.

For example, when Jake suggests that Cohn should travel with him to Strasbourg, because he knows "a girl there that will show the town" (Hemingway 6), Cohn retorts in despondency, "You know Frances. Any girl at all. I couldn't go that would be all" (Hemingway 6). However, his blind nobility to Frances vanishes after an encounter with Lady Ashley, whose beauty leaves Cohn stupefied. The narrator directly mocks this incident by rendering Cohn as looking a "great deal as his compatriot must have looked when he saw the promised land" (Hemingway 24). By equating Lady Ashley with Israel, Jake minimizes the gravity of Moses' journey and compares it to a meager lustful attraction. Perhaps William Vance discerns it best in the following statement, "The impression of Cohn given in the first two chapters is unsympathetic, and the precipitate manner in which he falls in love in the third chapter is rendered satirically" (41). ...read more.

Interestingly, this residue is closely related to the pungent odor ascribed by Rosenberg's mold. Accordingly, the stereotypical Jew is also prone to tragedy as evidenced by the cruel remarks of Lady Ashley's group. Cohn is constantly reminded of his "sad Jewish face" that "depresses them so" and "doesn't add much to the gaiety" (Hemingway 182). Cohn, however, just waves the insults away, undisparaged. Consequently, the characters resort to derogatory ridicule; Bill calls Cohn a "k**e" and comments that "all their Jewish friends are a pain to have around" ( Hemingway 163). All in all, The Sun Also Rises is a host to an army of Anti-Semitic themes aimed at Robert Cohn, a stereotyped Jewish character forced to endure insult and outsider status due to his religion. This rampant bias diminishes the value of the story significantly and suggests that "the traits of meanness, corruption, and weakness are somehow bound up with Jewishness" ( Wagner-Martin 171). ...read more.