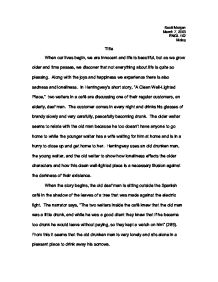 Scott Morgan March 7, 2003 ENGL 102 Meloy Title When our lives begin, we are innocent and life is beautiful, but as we grow older and time passes, we discover that not everything about life is quite so pleasing. Along with the joys and happiness we experience there is also sadness and loneliness. In Hemingway's short story, "A Clean Well-Lighted Place," two waiters in a caf� are discussing one of their regular customers, an elderly, deaf man. The customer comes in every night and drinks his glasses of brandy slowly and very carefully, peacefully becoming drunk. The older waiter seems to relate with the old man because he too doesn't have anyone to go home to while the younger waiter has a wife waiting for him at home and is in a hurry to close up and get home to her. Hemingway uses an old drunken man, the young waiter, and the old waiter to show how loneliness effects the older characters and how this clean well-lighted place is a necessary illusion against the darkness of their existence. ...read more.

He doesn't care that the old man is lonely; all he cares about is getting home to his wife. He felt the old man had no regard for those who had to work. When the old man signals inside yet again for more brandy and the younger waiter goes out and tells him that he can't have anymore because they are closed and signals for him to go home. So the old man gets up and pays for his drinks, leaves a tip for the waiter and begins to walk home. The younger waiter proceeded to close the blinds and close up the store an hour early only because he was tired and wanted to go home, further showing his lack of compassion for not only the old man but for anyone else who would have a need for the cafe. The older waiter was sad that the younger waiter closed early. The older waiter then opens up to the young waiter telling him his true feelings. He tells him that he lacks everything that the young waiter has. ...read more.

The old waiter then walks into a bar and stands at the bar and orders a drink. He then says to the bar tender, "The light is very bright but the bar is unpolished"(291). The bartender said nothing to him. The old waiter is saying that this is a nice bar but it is not as cleans as it should be. It lacks the clean part of a clean and well-lighted place. He then goes home and lies in his bed and finally goes to sleep after the daylight comes up and says to himself, "it is probably insomnia. Many must have it"(291). This lets us know that he is an insomniac, one that does during the night and sleeps during the day. That is why he waited until the sun came up to finally go to sleep. Hemingway describes this Spanish caf� as a haven for the older characters to escape their loneliness. They have nothing else to live for, nothing to look forward to, and no pleasure left in life except for the comfort of being able to spend a little time in a clean, well-lighted place. This is a necessary illusion against the darkness of the older characters' existence in this short story. 4 2 ...read more.