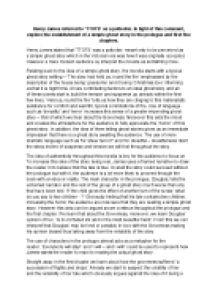 Henry James referred to TTOTS as a potboiler. In light of this comment, explore the establishment of a simple ghost story in the prologue and first five chapters.

﻿Henry James referred to ?TTOTS? as a potboiler. In light of this comment, explore the establishment of a simple ghost story in the prologue and first five chapters. Henry James stated that ?TTOTS? was a potboiler, meant only to be perceived as a simple ghost story which in the Victorian era was how it was originally accepted. However a more modern audience ay interpret the novella as something more. Relating back to the idea of a simple ghost story, the novella starts with a typical ghost story setting ? ?The story had held us, round the fire? emphasised by the description of the house being ?gruesome? and it being ?Christmas Eve? informing us that it is night time. All are contributing factors to an ideal ghost story and all of these points start to build the tension and suspense up already within the first few lines. ?Held us, round the fire? tells us how they are clinging to this materialistic substance for comfort and warmth, typical connotations of fire. Use of language such as ?dreadful? and ?terror? increases this sense of a greater impending ghost story ? that of which we hear about the Governess. ...read more.

The use of characters in the prologue almost acts as a metaphor for the reader. ?Everybody will stay!? and ?I will ? and I will!? could be used to represent how James wants the reader to react to reading the actual ghost story. Straight away in the first chapter we learn about how the governess suffered ?a succession of flights and drops?. Already we start to suspect the volatility of her and the reliability of her tale which obviously argues against the idea of it being a simple ghost story and starts to lay down the foundation for the idea that there may be undercurrents of something more suspect. However her description of Bly is incredibly positive. ?A lovely day?, ?summer sweetness? and ?a friendly surprise? are all used in one sentence and all are incredibly optimistic, giving us the idea that the governess is a very positive person. However she does seem to be very hyperbolic, describing the first child, Flora, as ?one of Raphael?s holy infants?. Obviously this is taking it to extremes, which hints that this might not be the only thing that she is exaggerating throughout the novella. ...read more.

This quote backs up my previous point of the projecting this idea of meeting the master on her walks. During these first few chapters we experience a reasonable amount of religious language, ?Raphael?s holy infants?, ?divine? and ?he has red hair? these all imply ideas of how the plot is affected by the religious aspects of the Victorian era and their views on ghosts. As they did believe in ghosts and were mainly very religious, these ideas were accepted avidly and only increased any emotions felt within the Victorian reader as they progressed through the story. Overall, my personal views are that there are underlying psychological ideas in ?TTOTS? and that although it can be read as a straight ghost story, to fully appreciate the novella the reader must delve deeper and retrieve any obvious ideas that suggest more than just a typical ghost story. James uses a variety of techniques which make his characters seem a lot more emotional deeper than just a person who is afraid in a big house. However the idea of authenticity throughout does back up the point of it being a straight ghost story. I do believe that it is a mazed reader and can be open to a variety of interpretations. ...read more.