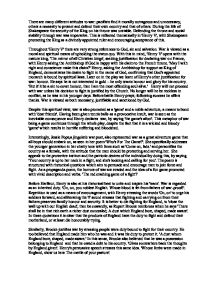 Henry V compared to the War Poets. Throughout 'Henry V' there are very strong references to God, sin and salvation. War is viewed as a moral and spiritual means of upholding the status quo.

There are many different attitudes to war: pacifists find it morally outrageous and unnecessary, others a necessity to protect and defend their own country and that of others. During the life of Shakespeare the security of the King on his throne was unstable. Defending the throne and social stability through war was imperative. This is reflected thematically in 'Henry V', with Shakespeare promoting the King as a divinely appointed ruler and encouraging acceptance of this. Throughout 'Henry V' there are very strong references to God, sin and salvation. War is viewed as a moral and spiritual means of upholding the status quo. With this in mind, 'Henry V' opens with the mature king, 'The mirror of all Christian kings', seeking justification for declaring war on France, with Henry asking the Archbishop if God is happy with his claim to the French throne. 'May I with right and conscience make this claim?' Henry, asking the Archbishop for support as King of England, demonstrates his desire to fight in the name of God, confirming that God's appointed monarch is bound by spiritual laws. Later on in the play we learn of Henry's other justification for war: honour. He says he is not interested in gold - he only wants honour and glory for his country. ...read more.

He labels him and his soldiers a 'happy few', a 'band of brothers', rather than calling them an army and presenting them as a unit that's not only hostile and foreign to the attackers but also to each other. He uses pronouns such as 'we' and 'us' rather than 'I' and 'you'. This demonstrates equality and unites the army to encourage the bonds of 'brotherhood' between them - a clever rhetorical tactic to persuade and encourage soldiers to rise above their individual circumstances and differences and become a more robotic mass. In contrast, poets such as Owen and Graves deliberately focus on the individual, whereas Henry encourages his soldiers to lose their individuality for the sake of England. This is seen as a clever leadership tactic: leading under the guise of not purely following a leader, but of everyone being of equal status. War is instinctively a natural act of defence, and is Henry's first thought when he is insulted. When provoked, animals attack, as shown in the imagery of Act 3, Scene 2. Henry tells his soldiers that when they hear 'the blast of war', their first actions should be those of the tiger, acknowledging an aggressive and instinctive side to these men. ...read more.

Henry uses collective images to take the focus off his individual weakened soldiers, plagued with casualties and illness. During his bluff the focus is not on the actual torment that the 'knock kneed... hags' that had been 'cursing through sludge' (as soldiers were described by Wilfred Owen) were going through. The focus in on the potential horror in the images of rape and mindless violence evoked by Henry that stop people such as the Governor from looking at the army that may not even be able to carry out such an attack too closely. On the whole, 'Henry V' glorifies war. It is represented as an opportunity to display courage, heroism and brotherhood. The consequences of war are addressed in some poignant speeches, yet still the audience marvels at Henry and his army. Patriotic poets such as Jessie Pope are similarly sparing with their images, intent to encourage conscription and bravery, whereas the horrific truth about war is starkly presented by Wilfred Owen in his poems such as 'Dulce Et Decorum Est' and 'Anthem for Doomed Youth'. Overall, war is war, but there are many different attitudes to the event, and some - when presented in the right way - ultimately prevail, much like Henry and the English did over the French with simply a few words. ...read more.

This is a very well written essay which selects appropriate quotes to support perceptive comments. There is accurate use of terminology and close analysis of language. More topic
sentences which focus on the question are needed - as at times the essay loses focus on the main points of the question. This was a complex essay to write and on the whole it is a good attempt and well structured.