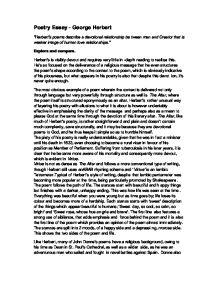 Poetry Essay - George Herbert "Herbert's poems describe a devotional relationship between man and Creator that is weaker image of human love relationships." Explore and compare. Herbert's is visibly devout and requires very little in-depth reading to realise this. He's so focused on the deliverance of a religious message that he even structures the poem's shape according to the context to the poem, which is obviously indicative of his piousness, but what appears in his poetry is also that despite this devotion, it's never quite enough. The most obvious example of a poem wherein the context is delivered not only through language but very powerfully through structure as well is The Altar, where the poem itself is structured eponymously as an altar. Herbert's rather unusual way of layering his poetry with allusions to what it is about is however undeniably effective in emphasising the clarity of the message and perhaps also as a mean to please God at the same time through the devotion of this literary altar.The Altar, like much of ...read more.

The stanzas are split into 2 moods, of a happy side and a depressing, morose side. This shows the two sides of the poem and life. Like Herbert, many of John Donne's poems have a religious background, owing to his time as Dean in St. Paul's Cathedral, as well as a wilder side, as he was an adventurous man who sailed and fought in naval battles against Spain. Donne also secretly married the daughter of his boss without permission and inevitably received a lot of criticism for this. Perhaps because of this, Donne wrote many religious and passionate, but at the same time forceful poems. Holy Sonnet 10 is an Iambic Pentameter, and follows an ABBA pattern as opposed to ABAB used by Herbert. However Holy Sonnet 10 does not follow this pattern, as halfway through the poem the pattern changes to CDCD which is the same as Herbert, then however, the final 2 lines are in an E, E pattern which is completely random from the other poems I have studied. ...read more.

But Donne's poetry never comes off quite as lacking in faith, as Herbert's does. In the 7th line, Donne makes a reference to reason ruling man instead of God. Being quite a heretical thought at the time, it is however Biblically rooted -it was believed that it was reason that separated humans from animals and so is human's defining characteristic. Donne goes on to say that reason sometimes fails man and betrays him, but God is always there and will forgive men. This shows Donne's faith in God, which is much the same as Herbert. Donne however seeks accepts the inevitable and gives himself up to God and imprisonment. The whole idea of God imprisoning and ravishing a person is completely paradoxical when God is seen as a forgiving being. To show this, Donne has made the last 2 lines, paradoxes. 'You enthrallmee, never shall be free' and 'ever chast, except you ravishmee'. While Donne is more daring and passionate, he is still more fervent in his belief that God will be there, where Herbert is less certain, evident by his devotion within the poetry that still lacks a sense of drive. ...read more.